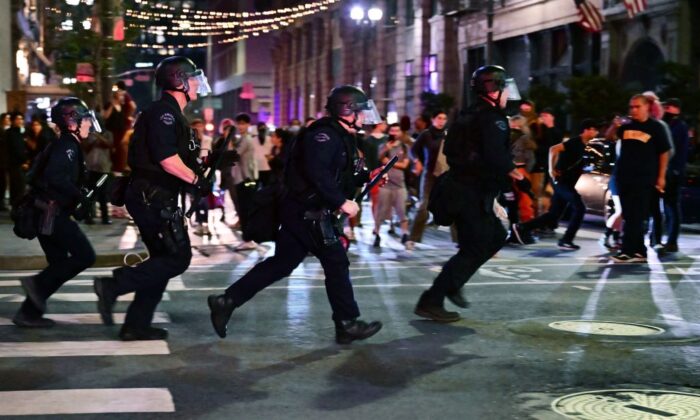 Police holding batons move to disperse a crowd of abortion rights activists protesting in Los Angeles after the overturning of Roe Vs. Wade by the US Supreme Court on June 24, 2022. (Frederic J. Brown/AFP via Getty Images)
Southern California

LOS ANGELES—A 30-year-old man was arrested June 24 for allegedly attacking a police officer with a “makeshift flamethrower” during a pro-abortion protest, and could face charges of attempted murder.

Hundreds of protesters gathered downtown in the hours after the U.S. Supreme Court announced its decision to overturn Roe v. Wade, the 1973 precedent that largely legalized abortion in the United States; and after some skirmishes occurred, the Los Angeles Police Department (LAPD) declared an unlawful assembly and issued a temporary citywide tactical alert to clear the streets.

Police said Ortiz hurled a makeshift flamethrower at an officer who had to be treated for burns at a hospital. Bernado allegedly tried to take an officer’s baton, prompting police to fire a 40mm less-lethal round at her before she was taken into custody.

“I condemn the violence against officers that occurred last night [Friday] and into today [Saturday morning],” Police Chief Michel Moore said Saturday. “Individuals participating in such criminal activity are not exercising their First Amendment rights in protest of the Supreme Court decision, rather, they are acting as criminals. The Department will vigorously pursue prosecution of these individuals.”

The Police Protective League also issued a lengthy statement Saturday condemning the actions of some in the crowd at Friday’s protest.

“As a society, it should be easy to condemn attacking police officers with improvised blowtorches, or throwing fireworks, rocks, and bottles at officers under the guise of ‘protest.’ Yet, the silence is deafening from our so-called community’s leaders.” League officials said. “This type of raw violence on display in Los Angeles and across the nation from dangerous mobs hell-bent on destruction has nothing to do with a woman’s right to choose. Rather, it is nothing more than disgusting opportunistic behavior carried out by criminals hiding behind our First Amendment.

“LAPD officers are sick and tired of being violently targeted by criminals using the First Amendment as a shield for them to purposefully attack police officers,” the statement continued. “Our officers are sick and tired of the silence and inaction from our elected and Department leaders when they are attacked. Seems some of these `leaders’ forgot how to Tweet or they can’t seem to find their voice to condemn these attacks on our officers when it does not fit their political narrative, align with their point of view or ruffles feathers.

“Violence is violence and it must be met with a strong response, and order must be restored. We demand the leadership of the LAPD to set aside politics and focus on protecting our officers and law-abiding residents from criminals.”

Protests against the Supreme Court’s decision carried on throughout the weekend, with the fourth day of protest scheduled for Monday in downtown Los Angeles.

On Saturday,  a group of protesters walked onto the 101 Freeway, entering the off-ramp from Broadway Avenue at 3:42 p.m., but the off-ramp was cleared about 17 minutes later, according to the LAPD.