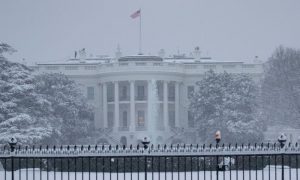 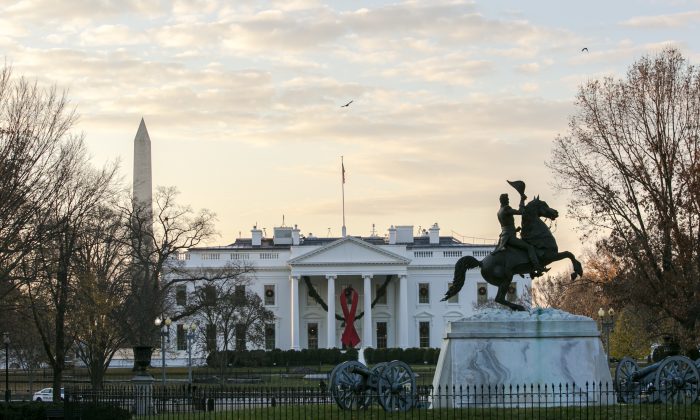 The statue of President Andrew Jackson in Lafayette Square near the White House, on the morning of Dec. 2, 2017. (Samira Bouaou/The Epoch Times)
US News

ATLANTA—A Georgia man accused of plotting to attack the White House with an antitank rocket and explosives must remain in custody while his case moves forward, a judge ruled Thursday, Jan. 24.

Hasher Jallal Taheb, 21, was arrested Jan. 16 in an FBI sting. He had traded his car for an antitank rocket, guns, and explosives and had shared plans to storm the White House with an undercover FBI agent and a confidential FBI source, authorities said.

He was indicted this week and is charged with attempting to damage or destroy a building owned by the United States using fire or an explosive, federal prosecutor Ryan Buchanan said in court.

Local law enforcement reached out to the FBI in March after getting a tip from a community member saying Taheb had adopted radical ideas.

An undercover FBI agent and a confidential FBI source both contacted Taheb after he posted an ad in August to sell his car, Buchanan said. Neither bought his car but both stayed in contact with Taheb, who mentioned traveling overseas and wanting to attack the White House and the Statue of Liberty, the prosecutor said.

During meetings in December, Taheb produced sketches he had made of the White House, described a detailed plan to attack it and ordered specific weapons through the undercover agent, according to Buchanan.

Taheb met up with the undercover agent and FBI source on Jan. 16 to rent a car and trade their vehicles for weapons, with the intention of driving to Washington to carry out the attack, Buchanan said.

But it was a setup. After Taheb loaded the weapons into the rental vehicle and climbed into the passenger seat, agents arrested him, according to a court filing.

The detail and specifics in Taheb’s drawings and plans and the fact that he ordered weapons and traded his car for them demonstrated his intent to follow through with the attack, Buchanan said.

Taheb also met with two unidentified people on Dec. 27, and told them he’d been kicked out of his mosque and used verses from the Quran to justify a violent attack, Buchanan said. He tried to recruit them to join him and asked them to keep the conversation private, Buchanan said.

“I can’t state enough the seriousness of this offense,” Buchanan said, noting that the White House is a symbol of government and a popular tourist attraction. “An attack there involving explosives has the potential for grave, grave damage.”

Brian Mendelsohn, another public defender, questioned one of the FBI case agents, seeking to show that it was the undercover agent and FBI source who influenced Taheb and took some of the concrete steps to carry out the plan.

Johnson told the judge Taheb, who was born and raised in Georgia, has a close family, submitting to the court photos of him with his brother, sister, mother, and his father who died when he was 7. He graduated from high school in 2015 and had jobs in restaurants, in retail, and washing cars and had volunteered at his mosque, she said.

Taheb was talking about selling his car so he could travel abroad, and it wasn’t until the FBI came along that it became a “nonsensical plan” to attack the White House, Johnson said. He knew nothing about guns, had no military training and didn’t have the means to carry out an attack without the FBI, she said.

But the judge said there’s evidence that Taheb “actively instigated and planned” an attack and “basically wanted to create havoc and mayhem and harm as many people as possible.”

Taheb is either “extremely gullible and susceptible to fantastical plans” or is the “mastermind of what could have been a very disastrous situation,” Baverman said. Either way, the judge said, he’s potentially dangerous and should remain locked up while his case proceeds.

Taheb was attentive during the hearing but didn’t show any emotion. Wearing an orange prison uniform with his hands and feet chained, Taheb smiled at his crying mother as he was led out of the courtroom.