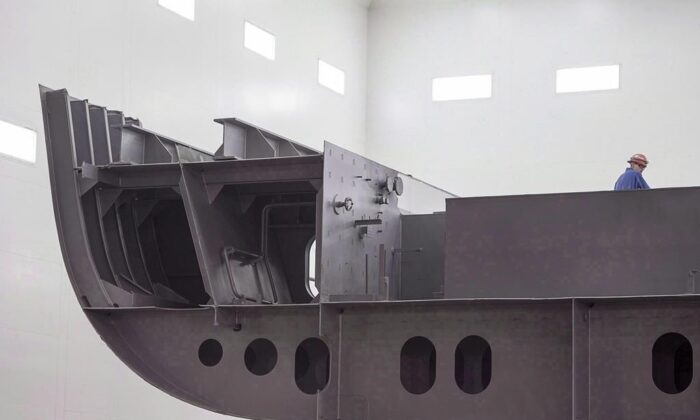 Man Accused of Trying to Spy for China ‘Willing to Be of Paramount Service’ to Chinese Authorities: Documents From Halted Prosecution

Documents from a halted prosecution detail how a Canadian man accused of trying to spy for China was “willing to be of paramount service” to the Chinese authorities.

The criminal proceedings against naval engineer Qing Quentin Huang for allegedly attempting to spy for China were halted by Ontario Superior Court Justice Michael Dambrot on Dec. 15, 2021, ruling that Huang’s constitutional “right to be tried within a reasonable time guaranteed” has been breached.

Huang, who worked for Lloyd’s Register Canada, was arrested in Burlington, Ontario, by the RCMP in November 2013 for allegedly trying to offer classified Canadian shipbuilding information to the Chinese embassy in Ottawa. Lloyd’s specializes in engineering and technology for the maritime industry.

Huang was charged under the Security of Information Act with attempting to communicate secrets to a foreign power. Police said the information related to elements of the federal shipbuilding strategy, which includes patrol ships, frigates, naval auxiliary vessels, science research vessels and ice breakers.

Huang’s criminal trial, however, was never heard in the years after 2013 as legal tussles over disclosure of information in the case played out in the Federal Court of Canada, the venue for deciding how much sensitive material can be kept under wraps.

On Jan. 14, the end of a 30-day deadline for the Public Prosecution Service of Canada (PPSC) to file a notice of appeal to overturn Dambrot’s ruling, the PPSC confirmed to the Toronto Star that the agency would not seek to do so.

“The Crown prosecutor applies the jurisprudence in determining when to appeal,” as reflected in PPSC policy, the spokesperson said. “It did so here and concluded that this was not an appropriate case to appeal in all the circumstances.”

The PPSC’s decision not to appeal, however, lifted the publication ban on Ontario Court of Justice Robert Bigelow’s May 2015 reasons for sending Huang’s case to trial. His 11-page ruling, obtained by the Toronto Star, included transcripts of Huang’s calls to the Chinese embassy, which have never before been made public.

“I’m willing to be of paramount service to the Chinese government,” Huang said during one of two calls to the Chinese Embassy in Ottawa, unaware the line had been wiretapped by the Canadian Security Intelligence Service, reported the Star on Jan. 20.

Bigelow’s ruling stated that Huang started working in the Burlington office of Lloyd’s in 2006. At the time of the alleged offences, he was still hired as a plan appraisal surveyor.

During his employment, Lloyd’s was a subcontractor to Irving Shipbuilding Inc. with the task of appraising and approving designs for Canadian vessels to be built under the Canadian National Shipbuilding Procurement Strategy (NSPS).

As the NSPS project consists of handling “controlled goods” in certain plans, surveyors in Lloyd’s are required to obtain security clearance. Controlled goods are defined by the government as goods that include components and technical data that are crucial to military and national security.

Bigelow wrote that Huang did not apply for security clearance despite numerous requests by his employer. The judge also noted that Huang’s employment with Lloyd’s was in “jeopardy” when the management approached him in mid-November 2013, telling him that some clients had complained about him missing deadlines.

Bigelow added that Huang had asked for a few days to respond to the complaints. During that time, the engineer downloaded about 6,000 files from the company’s internal network, including two documents labelled as controlled goods.

When Huang eventually applied for security clearance on Nov. 20, 2013, his management decided not to process his application until his employment status with the company was decided, the judge wrote.

According to Bigelow’s ruling, Huang made two calls to the Chinese embassy in Ottawa five days after downloading the 6,000 files.

During those calls, Huang identified himself as a senior structural specialist who appraised designs in Lloyd’s and his employer was working on Canadian military vehicles.

He added that he was a Chinese national who had worked outside China for many years and was now a Canadian citizen. He told the embassy that he felt mistreated by Lloyd’s, alleging the company had refused his security clearance on grounds of racial discrimination.

“That’s why right now I’m—if I’m being, being treated by them with such, such treatment—I really, I’m ready to risk everything, I, I may disclose the highly confidential military information to the Chinese government,” Huang said.

“Please phone me, phone me as soon as possible. I really willing to be of service to you, and then you may train me how to go about it,” he added.

In an interview with the Toronto Star, national security expert Aaron Shull said the ruling by Dambrot to stay the prosecution means “the case will never be heard on the merits and that just sends all the wrong signals.”

“What message does this send when we cannot successfully prosecute a case where the evidentiary record is strong, where the guy is basically caught red-handed … attempting to pass secrets to a foreign power,” said Shull, who is also a lawyer and managing director of the Centre for International Governance Innovation.