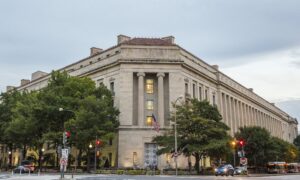 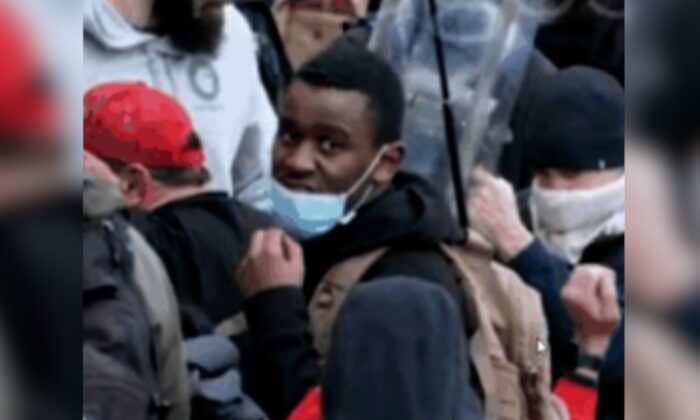 In this still image from video, a man identified as Emmanuel Jackson is seen outside the U.S. Capitol on Jan. 6, 2021. (FBI)
Crime and Incidents

A Maryland man who turned himself in with authorities earlier this week after allegedly assaulting law enforcement officers at the U.S. Capitol on Jan. 6 said he was not there in support of former President Donald Trump.

In a video shared on Twitter by writer and producer Alice Liu, 19-year-old Emanuel Jackson was seen talking during an interview on the day of the assault, explaining how the incident turned violent and also why he decided to join the protest.

“I had a bat. They were pepper spraying people. Then, they got me in the eye,” he told an unidentified reporter in the clip.

Jackson continued to explain he joined the protests to fight for America because the nation has been “taken over by globalists,” adding that he is “not here for Trump.”

Jackson also said he decided not to vote in the 2020 election because he thought his vote wouldn’t count, adding that he “learned a lesson” and will vote in the future.

“I thought my vote didn’t count, but I learned a lesson, and I will vote next in the midterms and in other elections,” he said.

Jackson was seen in surveillance video from outside the Capitol “repeatedly striking a group of both U.S. Capitol and Metropolitan Police Department uniformed officers with a metal baseball bat,” FBI agent Riley Palmertree wrote in a court filing obtained by The Epoch Times.

Photographs and video footage appeared to show the man holding and swinging the bat while wearing a blue surgical mask that partially covered his mouth but left his nose visible.

He surrendered to Washington police officers voluntarily on Monday, waived his constitutional rights, and admitted to taking part in the violent protest, the filing said. He identified himself in the video and photographs and confessed to assaulting officers.

He faces decades in prison if convicted.

Dozens of people have been arrested for participating in the unrest on Jan. 6, when protesters stormed the Capitol to interrupt a joint session of Congress. The storming has been widely condemned by lawmakers on both sides of the aisle.