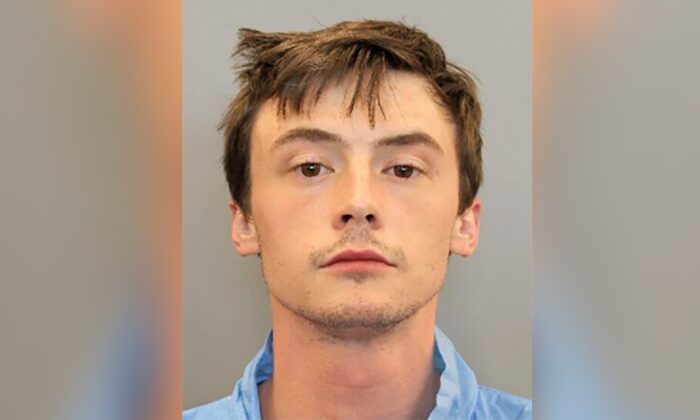 HOUSTON—A Houston man accused of stabbing a police dog and wanted for questioning in the death of his father, whose body was found hidden in his home’s garage, was arrested Tuesday after evading capture for several hours, according to authorities.

Police say Ryan Mitchell Smith, 26, is considered a person of interest in his father’s death and had warned he should be considered a public threat given his recent actions over the past few days, including charges related to trying to steal a car and attacking the police dog.

“Given his previous charge and what we’re looking at now, I think it goes without saying he has a tendency for violence,” Houston police Commander Kevin Deese said. “I would say he’s considered to be dangerous, certainly.”

After disappearing in a wooded area in Houston following a police chase early Tuesday, authorities said Smith was located around 2 p.m. about 50 miles northwest of Houston, walking along a highway in Waller County. Police said a tip led authorities to Smith’s location. He is facing a charge of evading arrest.

It is the second such charge Smith is facing since police allege he attempted a carjacking Saturday morning. After fleeing the scene of the carjacking and allegedly stealing merchandise from a store, Smith went to a nearby apartment parking garage, according to police.

At the garage, a Houston police dog named Nate caught up with Smith, who is accused of stabbing the animal. Smith was arrested on charges of robbery, interference with a police service animal, and evading arrest.

Police said Nate underwent surgery and was recovering at home.

Smith was released Sunday from the Harris County Jail after family members posted his bonds, according to Deese.

Family members of Smith’s father became concerned Monday when they had not heard from him. Both Smith and his father were staying at the same west Houston home, Deese said.

After only finding the father’s cellphone in the home, family members called police, who searched the house but found nothing.

As officers continued searching the home Monday evening, they noticed the father’s truck parked nearby, Deese said. Officers approached the truck and saw Smith behind the wheel.

Smith fled the scene and led officers on a chase that ended early Tuesday after he crashed the truck near a park, Deese said. Officers lost track of Smith after he ran into a wooded area. A weapon was found in the truck, he said.

Homicide detectives continued searching the home and found the father’s body in the garage.

“He was hidden in a location that made it very difficult for anybody to find him,” Deese said.

An autopsy is pending to determine a cause of death, but Deese said it appears the father did not die of natural causes.