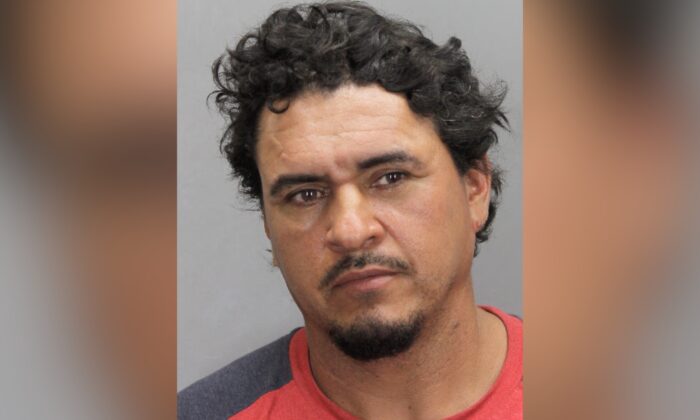 A man who was arrested last week on accusations of terrorizing women and girls on a number of occasions along a popular walking trail in Virginia is an illegal alien who was previously deported, according to officials.

Juan Rodriguez Alfaro, 42, indecently exposed himself and touched the genitals of multiple females on the Washington & Old Dominion Trail in Herndon, Maggie DeBoard, chief of the Herndon Police Department (HPD), said during a Sept. 11 press briefing.

Rodriguez Alfaro “exposed himself and was engaging in obscene sexual behaviors and grabbed the victim’s genitals before fleeing the area,” Deboard said.

In an update on the case, the Fairfax County Police Department (FCPD) announced on Monday that Rodriguez Alfaro “had an outstanding warrant for attempted rape and sexual assault” for an incident that happened last year in New York. He is facing multiple charges, including obscene sexual display and battery.

On Sept. 8, fugitive detectives arrested the man at a business in Herndon for the warrants, police said. He was taken to an adult detention center and is being held without bond.

A spokesperson for Immigration and Customs Enforcement (ICE) told FOX 5 DC that Rodriguez Alfaro is an illegal alien from Honduras who has been previously deported three times, adding that the suspect may be connected to a string of at least 21 different sexual assault incidents, mainly along the popular walking trail in Virginia.

The law enforcement agency said it has filed a detainer with the FCPD so ICE would be alerted in the event Rodriguez Alfaro might be released from their custody, according to the network. The local police department has adopted policies of not cooperating with ICE.

Investigators in Herndon obtained video evidence from one of Rodriguez Alfaro’s victims that shows an “indecent exposure” incident on Aug. 14 near Woodland Grove Place. In the footage, the suspect approached the victim on the trail bare from the waist down. He then started touching his genitals before running away.

Several days later, detectives executed a search warrant at Rodriguez Alfaro’s home in Herndon, where evidence was collected that linked the man to three additional incidents.

“Since he was arrested, detectives obtained additional charges stemming from these incidents to include indecent exposure, peeping, unlawful entry, and two counts of obscene sexual display,” investigators said.

Tom Corso, a Suffolk County detective assigned to the U.S. Marshals task force, told FOX 5 DC that Rodriguez Alfaro also attacked a New York woman, who is the wife of a law enforcement official, in October 2021. The woman was able to fight him off.

Rodriguez Alfaro is facing additional charges in that case, which include attempted rape and sexual abuse, Corso told the network.

Corso noted that investigators believe Rodriguez Alfaro was living in Suffolk County at the time of the attempted rape, but fled the area, making stops in Boston and Maryland before settling in Herndon.