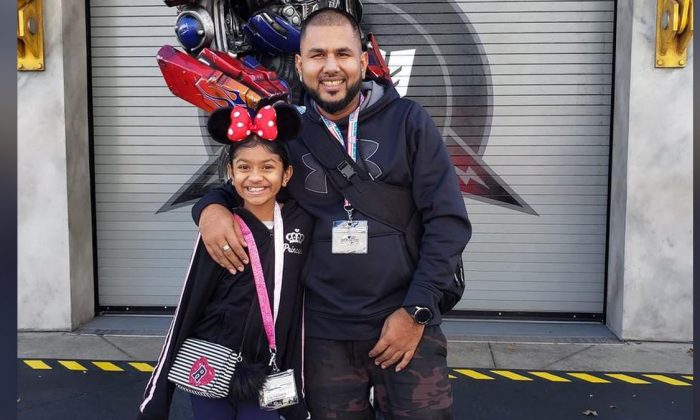 TORONTO—A man accused of killing his daughter on her 11th birthday died in the hospital on the evening of Feb. 20, police said, noting that their investigation into the girl’s death is not over.

Roopesh Rajkumar had been hospitalized with what police described as a self-inflicted gunshot wound shortly after his arrest.

His daughter, Riya Rajkumar, became the subject of an amber alert late Thursday night after her father allegedly indicated to her mother that he planned to hurt both the child and himself.

Shortly after the alert was sent out, Peel regional police knocked down the door to her father’s home in Brampton, Ontario, and found Riya’s body.

Roopesh Rajkumar, the dad accused of killing his 11-year-old daughter Riya Rajkumar, has died at Sunnybrook Hospital. He was admitted for a self-inflicted gunshot wound prior to his arrest by OPP last Thursday night. Peel Police forensic officers just arrived at the hospital. pic.twitter.com/x0jFptgPc7

Officers have not released her cause of death, and note that the homicide unit will continue its investigation.

Rajkumar was arrested by provincial police more than 100 kilometers (60 miles) away in Oro-Medonte, Ontario, and was charged with first-degree murder.

Investigators have said that after Rajkumar was transferred into the custody of local police, they discovered he was injured and took him to the hospital. The province’s police watchdog declined to investigate the circumstances leading to the gunshot wound.

The day Riya died—Valentine’s Day—was also her and her mother’s birthdays.

“She was so excited for her birthday, looking forward to having dinner later that evening,” Riya’s mother, Priya Ramdin, said in a statement Tuesday. “Never did I think that my daughter would not return back to me.”

“It’s very heart-wrenching,” said Peel Regional Police Const. Danny Marttini, making particular note of the mother’s pain. “We have to remember that this is a family, and she’s now moving forward without her daughter.”

Riya had just celebrated a joint Valentine’s Day birthday with her mother before being dropped off at a gas station in Mississauga, Ontario, last Thursday afternoon for a visit with her father, Roopesh Rajkumar, who did not live with them.

When he failed to bring Riya home at the scheduled time, Marttini said the mother became concerned. That anxiety morphed into something more serious after Rajkumar, an ex-boyfriend, allegedly indicated to the girl’s mother that he planned to harm both himself and their child, Marttini said.

“She came in already fully concerned saying, ‘This is what he’s saying to me, I’m concerned for the well-being of my daughter, I need some help,”’ she said.

Marttini said police began investigating the situation right away but did not immediately have grounds to enter Rajkumar’s home, where Riya’s body was found roughly five hours after she was reported missing.

“We need extenuating circumstances to force entry into somebody’s residence,” Marttini said. “To do a door-knock? No problem. But if nobody answers, that’s sort of as far as we go. … As the investigation unfolded, they did receive information that they did believe she was in the residence. As soon as they had that information, they proceeded.”

Shortly before entering the home, however, police had issued an amber alert in Riya’s disappearance. The alert, released just after 11:30 p.m., was issued via the national Public Alerting System on cellphones across the province.

Ontario Provincial Police Staff Sgt. Carolle Dionne said a motorist driving on Highway 11 in Oro-Medonte, Ontario, shortly before midnight noticed Rajkumar’s vehicle, which had been described in the amber alert.

“As a result of the amber alert, they observed the vehicle and gave us the coordinates,” she said. “Thankfully … we were able to apprehend this man.”

When Peel police took custody of Rajkumar from the provincial force, Marttini said officers became aware of an undisclosed “medical condition” that meant he required treatment at a trauma center. Rajkumar remained in the hospital under police custody on Friday evening.

As news of the girl’s death spread, several people stopped by the area around Rajkumar’s home to leave flowers and pay their respects.

Emmanuel Okafor, who lives nearby, paused near the home, clasped his hands and said a silent prayer.

“I pray to God the family lives through this,” he said. “No family should ever go through this. … It breaks my heart.”

Okafor said he followed the situation closely after the amber alert was issued.

“It’s senseless,” he said. “We were really hoping last night she would be found alive, not knowing this morning we’d have this tragic news.”

Jennifer Fuller, who has a daughter around the same age as Riya, laid flowers on a snowbank near the home.

Grief and shock were also setting in at Meadowvale Village Public School in Mississauga, Ont., where Riya was a grade five student.

The school issued a statement expressing shock at the girl’s tragic death, announcing flags would be lowered to half-staff, and outlining supports available to students.

“Riya was a well-liked student, and her death is deeply felt by everyone at the school,” Principal Stacy Service said. “Even students who did not personally know Riya will also be affected.”

Both Peel and provincial police said on Friday that they continued to deal with another form of fallout from the amber alert—people calling to complain about the late-night alerts or repeat broadcasts that were issued after Rajkumar was in custody.

Dionne lamented that some people valued their own convenience over the safety of a child, a sentiment echoed by Marttini.

“We’re talking about a child that was missing,” Marttini said. “I feel for everyone, but given the circumstances, I think it did lead to the arrest of the individual. I think that’s what we have to focus on.”

The amber alert that helped lead to Rajkumar’s arrest is a special bulletin issued when a child under 18 is abducted and believed to be in imminent danger. In order to meet the criteria for the alert, police must also have a description of either a suspect or a suspect vehicle.

A funeral for 11-year-old Riya Rajkumar is being held in Etobicoke today. https://t.co/wFm7B9S7lR