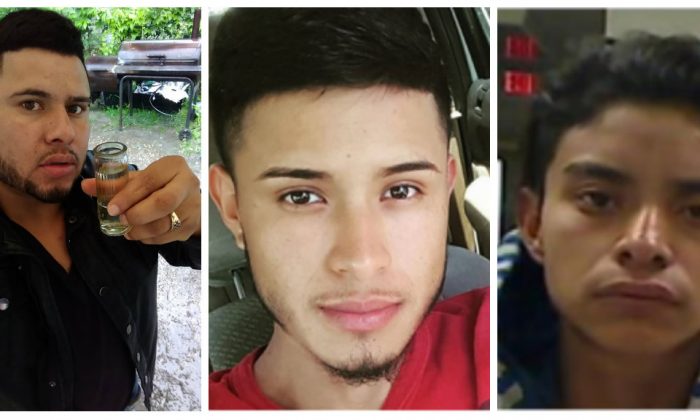 Davis Ramos Contreras (L), was taken into custody July 5, 2018, after he was accused by two girls of rape and kidnapping. Arnulfo Ramos (C) and Juan Garcias Rios Adiel (R) remain on the loose. (Bowling Green Police Department)
Crime and Incidents

One of the three men wanted for the alleged kidnapping and sexual assault of two teenage girls in Ohio has been arrested on July 5, according to the U.S. Marshals Service.

David Ramos Contreras, 27, from Mexico was arrested by the U.S. Marshals Service in Lubbock, Texas, after a nationwide arrest warrant was issued.

Contreras was found hiding under a bed at an address in the 1600 block of 21st Street in Lubbock. He will be extradited back to Ohio to face the charges, according to a police statement.

“The diligent and dedicated work of our fugitive task force, along with the U.S. Marshals in Lubbock, and our local partners enabled this arrest to happen quickly and safely. We know the hard work will continue until the other two suspects are apprehended,” U.S. Marshal for the Northern District of Ohio Pete Elliott said.

Authorities were seeking Contreras, along with Arnulfo Ramos and Juan Garcias Rios Adiel, 19, for kidnapping and sexually assaulting two teenage girls. The trio was charged with two counts of rape and two counts of kidnapping on July 2.

According to WTOL, the two sisters were staying at the Days Inn when four men, who were also staying at the inn, held them against their will and sexually assaulted them. The girls managed to escape their captors and were rushed to the hospital to be examined. Emergency room personnel contacted Bowling Green Police in Ohio to report the incident.

One of the four suspects, Simon Juan from Guatemala, was arrested earlier on June 29 for unlawful sexual conduct with a minor and transported to the Wood County Justice Center, according to authorities.

The U.S. Immigration and Customs Enforcement Agency joined the nationwide manhunt for the remaining three suspects on July 5.

Authorities are still determining the whereabouts of Ramos and Adiel and are appealing to the public for assistance to locate the two remaining suspects. Ramos previously lived in Texas, while Adiel lived in Florida.

The pair are believed to be non-U.S. citizens, reported WKRC. Authorities said Adiel had possessed a U.S. Permanent Resident ID card out of Fellsmere, Florida, however, the card was later verified to be fraudulent.

Contreras was reportedly deported from the United States in October 2017, reported Fox News.

Authorities were previously looking for two women who provided Contreras with a ride in a light-colored vehicle at a Walmart on June 30. After speaking with the women, investigators determined that they were not suspects in the case.

Anyone having information related to the whereabouts of the suspects is encouraged to contact the Bowling Green Police Division (419) 352-1131, Wood County CrimeStoppers at 1-800-54-CRIME, or their local law enforcement agency. You may remain anonymous and if the information results in the arrest and conviction of a suspect, you could be eligible for a reward of up to $1000.