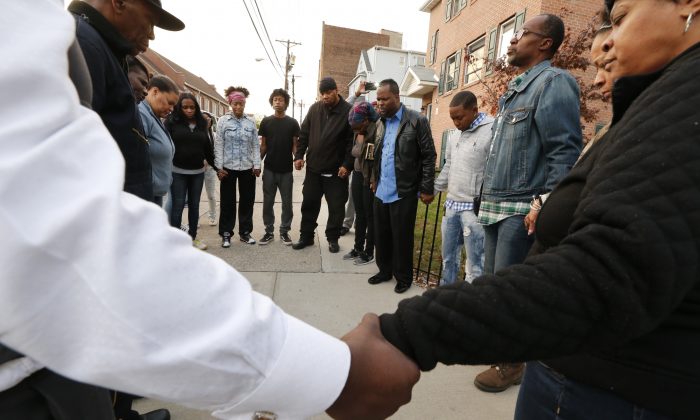 Neighbors hold hands in prayer after three people were killed and several others injured in a stabbing at a house in Newark, N.J. on Nov. 5, 2016. (Robert Sciarrino/NJ Advance Media for NJ.com via AP)
Crime and Incidents

NEWARK, N.J.—A man who authorities say was angry about a Facebook post has pleaded not guilty to stabbing three people to death and knifing three others in New Jersey’s largest city.

Jeremy Arrington appeared in court in Newark on Thursday. The 26-year-old faces three counts of murder and three counts of attempted murder, among other charges, stemming from an attack Saturday.

Authorities have said Arrington might have been angry that one of the victims had reposted a Facebook alert from police naming him as a suspect in a shooting and sexual assault.

A 23-year-old college student from Hanover Township and an 8-year-old girl and her 11-year-old brother from Newark died in the attack.

An adult and two other children escaped.