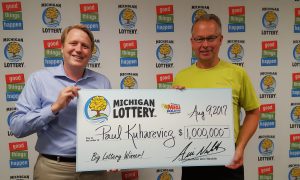 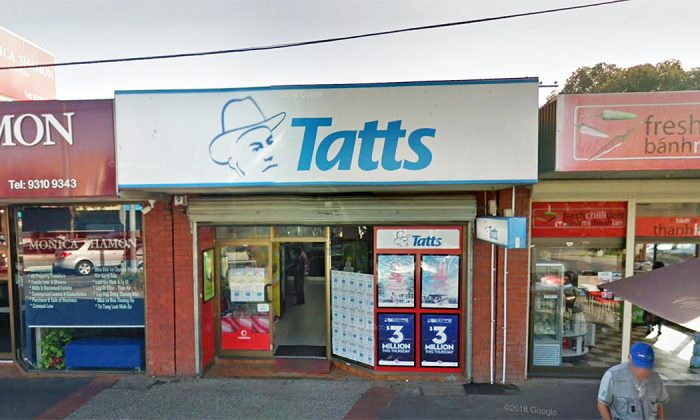 One lucky Oz Lotto entrant won the division one prize twice after buying one of the tickets at Winning Lotteries, in Greater Melbourne, Australia, on April 2018. (Google Maps Street View/Screenshot)
Australia

A Melbourne man accidentally won more than $46 million (US$33 million) on March 26 after buying two lottery tickets by mistake.

The man, who wishes to remain anonymous, bought the tickets at Winning Lotteries in the northwestern suburb of St. Albans and also the Footscray Lottery Centre in the city’s inner-west.

The man had no idea he had won a double division one prize of $46.6 million until the gaming company the Lott contacted him to inform him of his win.

“You’re kidding! Am I seeing things?” he said in a press release. “I just checked my entry online and I think I know what you’re about to tell me. I’m speechless, I can’t believe it, I just finished work for the night.”

The winner, who usually works as a labourer, was still unaware at that stage that he had won the division one prize of more than $23.3 million twice when the Lott informed him he had bought two tickets with exactly the same numbers, meaning he had won twice.

After realising this, he revealed he has played with the same marked numbers for 30 years.

“I play every week. I have always marked my entries but I have never chosen the numbers on anything in particular,” he said. “They weren’t special before but they are now.”

He said his first action will be to think carefully about what he could spend his fortune on.

“I need time for the news to register,” he said. “I might think about retiring, first maybe a new home or a holiday, I’ll definitely share it with my family.”

The Lott is still encouraging all those who bought a ticket for the $70 million (US$49.6 million) Oz Lotto draw check their numbers as soon as possible as a division-one from Tasmania is still yet to claim their prize money.

“Imagine discovering you’re a midweek multi-millionaire,” spokesperson Bronwyn Spencer said. “You may not think it’s possible that you could be the division one winner we’re searching for but, if you purchased an unregistered entry in this week’s Oz Lotto draw that you haven’t checked yet, you’re in with a chance.”

Lottery officials have no way to contact the ticketholder and have to wait for them to check their ticket and contact them. The ticket was purchased from Hobart City Lotto in downtown Hobart.

In addition to the three division-one prizes in the draw, a total of 1.1 million prizes worth more than $24.6 million (US$17.4 million) were awarded in divisions two through to seven. This includes 14 division two winners, who each landed $49,892.40.

Things People Do With Prize Money

Last year, a Sydney man donated a portion of his Lotto winnings to aid farmers struggling through the drought. The man, aged in his 40s, was among the seven division one winners and collected $686,700 in prize money, reported Yahoo7 News.

He told the news channel that he had been playing on and off for a while, and that initially, “I thought this was a joke.” He said he had a list of his favourite people who he was planning to share his new-found monetary wealth with and that farmers were on the top of this list.

“We were going to give a donation to the drought fund, but we can increase that now and make it more substantial. I think if we’re blessed with something like this, we should pass it on,” he told Yahoo7. “We’ll also pay off our mortgage and put the rest in for the kids, for their education.”

Perils of Winning the Lotto

Another Lotto winner in 2011 was horrifically murdered by her own financial adviser when the man became angry that woman from NSW was wasting her $5 million winnings with her husband. The adviser was found guilty of murder after he hit his client over the head with a rubber mallet before smothering her to death.