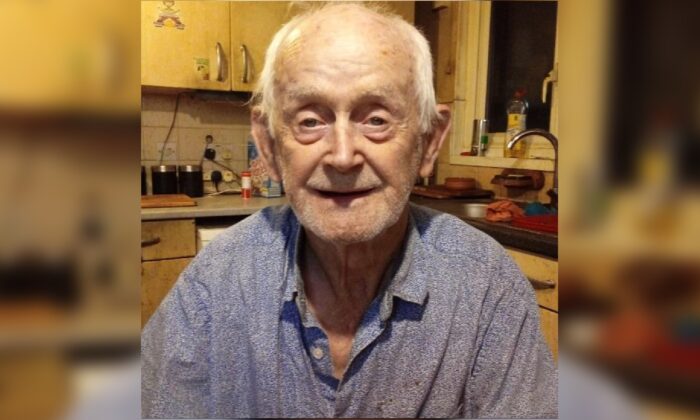 An undated photo of Thomas O'Halloran, 87, who was murdered on his mobility scooter in Greenford, west London, on Aug. 16, 2022. (Metropolitan Police)
UK

Man, 44, Charged With Murder of London Pensioner on Mobility Scooter

Detectives investigating the death of a pensioner who was stabbed as he rode his mobility scooter within yards of one of London’s busiest roads have charged a 44-year-old man with murder.

Thomas O’Halloran, who was 87, was attacked close to the A40 in Greenford, west London, on Tuesday, but managed to travel 75 yards before collapsing.

Lee Byer, 44, from Allenby Road in Southall, was arrested on Wednesday night and was charged with murder on Thursday evening.

He appeared before Willesden Magistrates Court on Friday and was remanded in custody until his first appearance next Tuesday at the Old Bailey, where he is expected to go on trial next year.

Prosecutor Louise Ahmad said O’Halloran had been subjected to a “vicious attack.”

O’Halloran was an eccentric character who would sometimes play an accordion for commuters at Greenford station as he busked to raise money for those affected by the conflict in Ukraine.

He had no children of his own but left behind a sister, two brothers, and several nieces and nephews.

O’Halloran was originally from County Clare in the Republic of Ireland and local Fine Gael Senator Martin Conway said his death had been met with “deep shock and sadness” in his hometown of Ennistymon.

“Tommy, as he was known, left Ennistymon for London 71 years ago but travelled home almost every year until about 10 years ago,” said Conway.

The Metropolitan Police said O’Halloran’s “have asked for their privacy to be respected at this very difficult time.”

Tuesday’s incident was the 58th homicide in London.