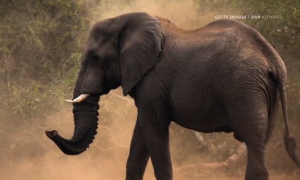 The remains of what was likely a mammoth have been uncovered during construction at Oregon State University’s Reser Stadium.

Anthropology professor Loren Davis, who was called to the site of the find, said, “There are quite a few bones, and dozens of pieces. Some of the bones are not in very good shape, but some are actually quite well preserved.”

Construction is currently underway on an expansion and renovation of the university’s football stadium, but was halted in the immediate area of the north end zone where the discovery was made. Further exploration found the remains of several other extinct animals as well.

According to Davis, finding the remains of mammoths is not strange for the area and since no human remains have been found, no special rules govern the site.

He said, “Animals who were sick would often go to a body of water and die there, so it’s not unusual to find a group of bones like this. We had all of these types of animals in the Willamette Valley back then.”

The exact age of the uncovered bones is as of yet unknown.