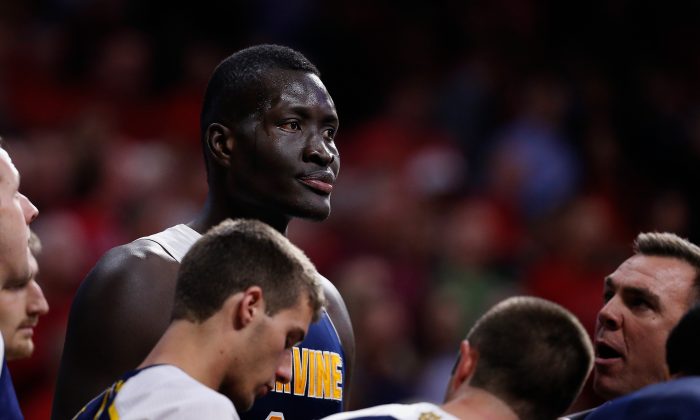 Mamadou Ndiaye #34 of the UC Irvine Anteaters stands in the huddle during a break from the second half of the college basketball game against the Arizona Wildcats at McKale Center on November 19, 2014 in Tucson, Arizona. The Wildcats defeated the Anteaters 71-54. (Photo by Christian Petersen/Getty Images)
College Sports

Mamadou N’Diaye has caught the eye of March Madness fans, with his gigantic frame and surprising agility considering just how tall he is.

Just how tall is he? 7’6″. With a wingspan of over eight feet, three inches. That’s very close to the wingspan of Rudy Gobert, the Utah Jazz center who has been harassing opponents in the NBA this season.

N’Diaye, 23 years old, and a sophomore, hails from Senegal. He moved to the United States five years ago after being spotted by scouts. An unnamed married couple became his guardians, though his parents are still alive and well in Senegal. He dominated high school basketball while playing in California. “He’s extremely strong,” his coach Jon Bahnsen said several years ago. He now weighs about 300 pounds.

He’s the main attraction at all of UC Irvine’s games, drawing applause for his dunks. He’s so tall that he can touch the rim without jumping.

“One of the funny things with Mamadou is, when we go out to see recruits now, we always think everyone is small,” assistant coach Nick Booker told told the Orange County Register. “Compared to him, 6-foot-11 guys look short.”

N’Diaye’s agility is surprising for a player of his size, and his picks are subtly efficient. He appears to barely touch the opponent, but then moves toward the basket, a secondary pick of sorts.

“As big as he is, he’s very agile,” UC Irvine associate head coach Ali Ton said. “We sort of take a lot of it for granted around here now. But he still does stuff once in a while that makes us go, ‘Wow.’ He can be amazing to watch.”


N’Diaye said that he’s ready for the additional attention that March Madness will bring him. Basketball fans could easily see him in the NBA in a year or two.

“I’m ready for this,” Ndiaye said. “I’m used to it. Attention is nothing new. My whole life is kind of like this.”