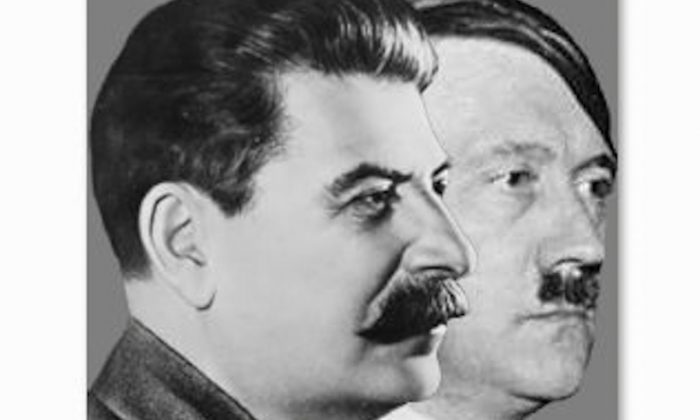 Joseph Stalin (L) and Adolf Hitler (R). Germany's move to invade the Soviet Union came at curious, fateful time. Was it coincidence or the realization of an old warlord's curse? (Wikimedia Commons)
The Dead End of Communism

“There is nothing answered without a question asked.”

The term final solution usually will find its way into the passages of commentary on the German National Socialists (Nazis). However very few people know what the initial question was that was first asked, nor by whom. In addition, even fewer recognize that Adolf Hitler was not the originator of the question or the answer.

In the case of the emerging social engineers of the nineteenth and twentieth centuries, no one had greater influence than Thomas Malthus. A controversial person today and even more so in his day, Malthus wrote an essay named “Principle of Population” and raised the question for the first time on the dangers of overpopulation. The potential catastrophic outcome became known as the “Malthusian Catastrophe.”

Malthus, an English clergyman and economist, believed he recognized the issue of population and its impact on resources, the environment, and society in general. His research moved him to conclude that the rate of population increased faster than society’s ability to produce the resources to sustain it.

The implication on the economic structure of a society was also at stake. He added that with an increase of laborers out of proportion with the available work, large amounts of families would have no means to sustain themselves. With hunger, pestilences, and crime as a result of an impoverished majority, he claimed that action must be taken to “put a check on population.”

Subsequent models encouraged “voluntary celibacy” for “bad specimens” of the population, social standards regarding morality for the poorer classes, and a restriction on social interaction for some, were a few of the early

solutions. How early? Malthus began his hypothesis in 1798.

In reality, the Malthusian “dilemma” was actually a question. A question posed to the social elites of the world. Over the years the answers returned by the social engineers became bolder and bolder but with no ultimate solution.

Although Malthus is not widely known now, his influence on governments as well as those planning to overthrow existing governments was immense, both past and present. The theories of Malthus found much affection in the revolutionary minds of individuals such as Charles Darwin (the originator of the modern evolutionary model), Karl Marx and Fredrick Engels (authors of the Communist Manifesto and Das Capital), Lord John Maynard Keynes (founder of the World Bank, Fabian Socialist, and director of the British Eugenics Society), Mao Zedong (follower of Karl Marx, Chinese Communist Party founder, and murderer of some 60–80 million of his own people), and many more.

As the “question” of overpopulation continued to be asked well into the twentieth century, the vehicle that undeniably unified scholars on the subject was the model of eugenics. (See Hitler, Socialism and the Racial Agenda, part 2).

By the commencement of the “Third International Eugenics Conference” in New York in 1932, the proposed forms of population control and resource consumption reduction were established and were as follows:

1. Birth control through the methods of sterilization of the undesirables, use of contraception, and abortion.
2. Euthanasia for the sick and old.
3. Establishing a one- or two-child policy for appropriate countries.
4. Promotion of abstinence for the poorer classes.
5. State-educated “Family Planning” organizations.
6. Restrictions on international migrations.
7. Environmental protection laws and the promotion of conservationism which led to the “green movement.”

Apparently the “Final Solution” had been found.

That same year, Margaret Sanger, Communist Party USA member, American Eugenics member, and founder of “Planned Parenthood,” lobbied the U.S. Congress on behalf of her cohorts. She represented her benefactors, urging the passing of a “two-child policy,” as well as a law that called for the forced sterilization of over 25 million Americans. Shockingly enough, the two bills were nearly passed by Congress.

Regardless, 34 states had already adopted sterilization laws and forced the procedure on over 50,000 Americans.

Although temporarily met with defeat, the fight for implementing socialist eugenics laws had just begun.

In 1924 Adolf Hitler wrote his infamous population control and social planning book Mein Kampf, and credited the American eugenicists as his inspiration and even wrote a fan letter to author Madison Conrad upon the publishing of his monumental eugenics-based book, The Passing of the Great Race. In the letter, Hitler called the book his bible.

One year after the International Eugenics conference in 1932, the National Socialists won majority control of the Reichstag, Germany’s political parliament, and Hitler became chancellor of Germany.

Almost immediately laws were passed to legalize abortions with a specific directive on who to forcibly apply it to. German socialists were only the second in history to accomplish this goal of the Eugenics plan after the Russian socialists in 1919.

In the following months, the remainder of the methods of population control and reduction were implemented one by one, with forced abortion, sterilization, and euthanasia at the top of the list.

Ultimately, it is reported that the Socialist Party of Germany performed over 500,000 abortions a year while in power. A staggering amount considering that the Nazis reigned from 1933 to 1945. That totals to approximately 6 million abortions, both forced and voluntary, in a 12-year period.

Propaganda films were produced by the German ministry to popularize the eugenics practices and enthusiastically documented that similar American and British laws had already been passed. The Birth Control Review, a magazine started by Margaret Sanger, was regularly quoted by the Nazi party.

Sanger was highly praised by Hitler for her work in eugenics and her promotion of abortion as a population control tool. Often calling her his inspiration, Hitler ensured she worked closely with the most important person in the early Nazi movement, Dr. Ernst Rudin, to plan their new society.

Ernst Rudin was one of the founders of the National Socialist Party at its birth in 1918. As the director of the Rockefeller-funded “Kaiser Wilhelm Institute” and acting as the German Eugenics Society founder, Rudin quite possibly was more influential on Hitler than anyone else in Germany.

Furthermore, Dr. Rudin was elected president of the “Third International Eugenics Conference” with attendees from around the world. Ultimately, he authored the “racial cleansing” policy for the Nazi Party in his book Law for the Prevention of Hereditarily Diseased Offspring.

In 1933, Rudin headed the Nazi government appointed committee called “Expert Committee on Questions of Population and Racial Policy.” What he penned that year not only became the racial cleansing policy for Nazi Germany, ironically copying verbatim the internationally accepted eugenics policies, but they were heartily published in Sanger’s Birth Control Review magazine, with much acclaim.

History has recorded the horrors that followed the establishment of this racial cleansing policy.

In the subsequent years, the socialists of Germany marched on Europe and then rallied others to begin a war to end all wars. The ultimate outcome of World War II was that socialism’s racial cleansing policy cost the lives of over 50 million people. When combined with the carnage of other socialist revolutions such as the Bolsheviks’ in Russia, Mao’s Red Army, Pol Pot of Cambodia, and Castro’s Cuba, the death toll climbs to a staggering 150 million people killed.

Is this the utopia Karl Marx had in mind?

To many, it is a staggering dichotomy to compare the Russian socialists to the German socialists as if there is only a commonality in name.

However history preserves the real story and their shared common goals.

“There is more that binds us to Bolshevism than separates us from it.”—Adolf Hitler

Communism is estimated to have killed around 100 million people, yet its crimes have not been compiled and its ideology still persists. Epoch Times seeks to expose the history and beliefs of this movement, which has been a source of tyranny and destruction since it emerged.