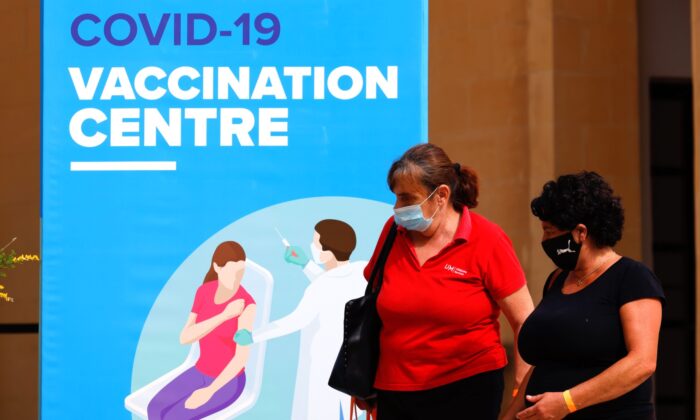 People walk outside a vaccination centre at the University of Malta in Msida, on May 24, 2021. (Darrin/Reuters)
Europe

The COVID-19 booster shot will soon be offered to everyone eligible in Malta and Germany, health officials in both countries announced on Friday, citing a recent increase in CCP virus cases.

Chris Fearne, Malta’s health minister, said during a press briefing that the effectiveness of the vaccines is waning as the country registered 40 new CCP (Chinese Communist Party) virus cases on Friday, the highest reported number in six weeks.

“The decision to start giving a booster was the right one because immunity is waning and so the booster is crucial,” Fearne said. “We believe the booster will make a big difference in Malta,” he added.

The booster shots are already being given to people aged over 70 and the vulnerable, mostly with underlying health conditions. The island nation located in southern Europe will soon start offering the jabs to everyone aged 12 and over, although Fearne did not specify the timeline.

Healthcare workers and teachers will get their boosters from next week. The shots will then be offered to other categories of people according to their age in a program that will continue well into 2022 for the youngest.

Malta has the highest vaccination rate in the European Union, with 94 percent of the people having been fully vaccinated. Already 75 percent of the 70 plus age group have received boosters.

Fearne said that although CCP virus cases are increasing again and more people are being hospitalized with COVID-19, most patients are experiencing very mild symptoms.

Germany Agrees on Booster Shots for All

Meanwhile, German health minister Jens Spahn said on Friday he had agreed with regional health ministers that in the future everyone should be offered a COVID-19 booster shot six months after receiving their previous injection.

“Booster shots after six months should become the norm, not the exception,” Spahn told reporters at a news conference after meeting with state health ministers.

Spahn made the remarks as German health officials registered its highest infection rate for two consecutive days since the start of the CCP virus pandemic. On Friday, authorities recorded 37,640 new CCP virus cases, marking the highest single-day count to date.

Michael Kretschmer, the prime minister of the eastern German state Saxony, said a new lockdown is likely if the country doesn’t take immediate action to reverse the rise in cases.

“If we take too much time now, it will end in a lockdown like last year,” he told Deutschlandfunk radio.

Booster shots in Germany have already started being administered in September, with the priority given to health care workers and those deemed to be at a higher risk, such as people who don’t have strong immune systems, the elderly, or the immunocompromised.