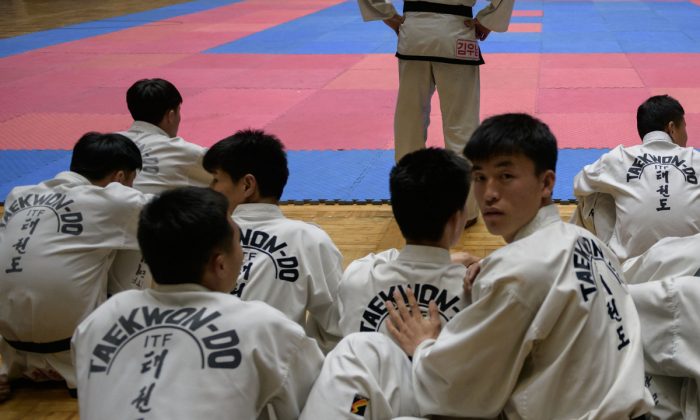 Mall Brawl! Taekwondo Versus Wushu, And the Winner Is …

A fight erupted in a mall between two martial arts groups over a territorial dispute. 15 people were detained, and no one suffered serious injuries, according to Pear Videos, a major Chinese short-video news outlet.

The brawl occurred on May 2 when the Taekwondo group passed out advertising fliers near the Wushu school, which operates out of a mall in Jiangsu Province, China.

Limited footage captured by mall-goers with their cellphones suggests that the Wushu School won the battle, as one image shows six members of the Taekwondo school lying on the ground.

The Changshu City police released a statement on May 3 that said seven people were injured—one with minor injuries, and six with slight injuries.

The fight broke out at about 5:45 in the evening in front of a store for new mothers and their babies. Footage shows the Taekwondo practitioners in white uniforms, and black belts. The Wushu practitioners wore navy blue polo shirts and track pants.

Both groups huddle together, opposite each other, with a row of shops on one side, and a glass-railed drop-off on the other. Due to lack of footage, it’s unclear who initiated the first attack.

The few seconds of footage shared on Weibo, China’s version of Twitter, show the Taekwondo group kicking at the Wushu practitioners. One of the larger Wushu practitioners dodges the kicks, grabs the uniform, and assaults them with punches.

After the fight progresses, six Taekwondo practitioners are seen lying on the tile floor. For unclear reasons, though, the Wushu practitioners have backed away from the fight. Other fighters in white still approach the ongoing brawl, while some record the incident.

When the police arrived, 15 of the fighters were taken into custody, all for disorderly behavior.

Several mainland Chinese media sites misreported that the Wushu combatants were employees of the baby store.