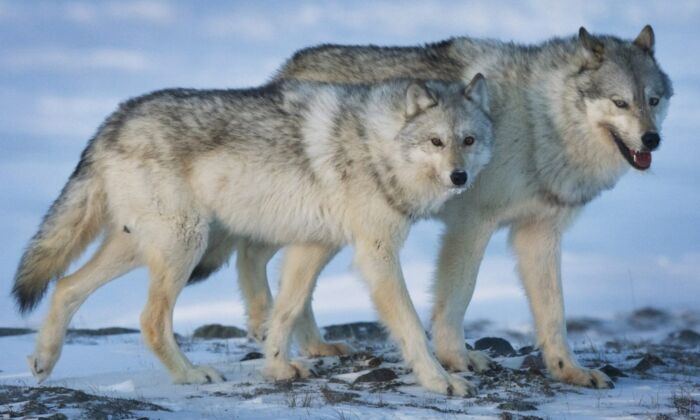 A female wolf, left, and male wolf roam the tundra near The Meadowbank Gold Mine located in the Nunavut Territory of Canada on March 25, 2009. (The Canadian Press/Nathan Denette)
Canada

The Greater Vancouver Zoo said Tuesday afternoon that a number of its wolves were on the loose after the animals were believed to have been released from their enclosure as a result of “malicious intent.”

However, it said there was no danger to the public, and it was working with the B.C. Conservation Officer Service to “contain” the animals, while the Langley RCMP investigated what appeared to be a case of unlawful entry and vandalism.

“GVZoo staff continue to actively search for a small number of remaining wolves un-accounted for,” the zoo said in a posting. It highlighted the posting with a Facebook message at 3.25 p.m.

Earlier, British Columbia’s Environment Ministry had said that only one wolf was still missing at the zoo, located about 55 kilometres east of Vancouver in the community of Aldergrove.

It did not say how many had escaped at the facility, which says it has nine adult grey wolves and six cubs.

The zoo said on its website that a number of wolves were discovered outside their enclosure Tuesday morning, triggering what it said was an “ongoing investigation and is suspicious, and believed to be due to malicious intent.”

It said most of the wolves were back in the care of its animal health and welfare team.

The zoo had announced that it was closed on Tuesday morning via its Instagram and Facebook accounts.

The Environment Ministry said anyone who sees a wolf should keep their distance and report it by calling 1-877-952-7277.