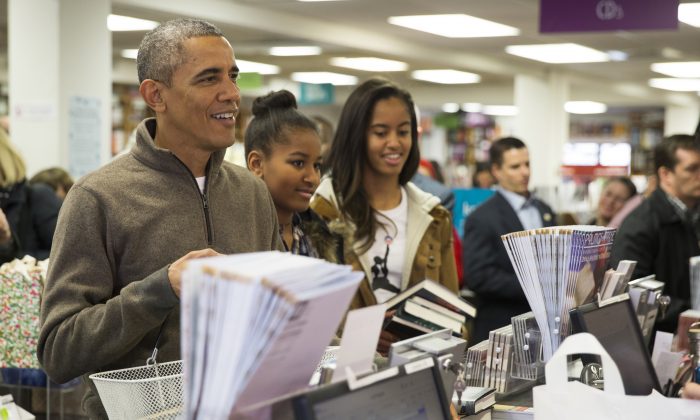 President Barack Obama, left, shops with his daughters, Sasha, center, and Malia, at Politics and Prose bookstore for "Small Business Saturday," on Saturday, Nov. 29, 2014, in Washington. (AP Photo/Evan Vucci)
US

Malia and Sasha Obama, the daughters of President Barack Obama and Michelle Obama, were slammed in a rant posted by a former Republican National Committee media director.

The official, Elizabeth Lauten, lashed out at the two girls–aged 16 and 13–for their clothing and attitude during the annual White House turkey pardon.

She described the two as “classless” and said their short skirts “deserve a spot at the bar,” MailOnline reported.

Lauten, who is currently the media director for Rep. Stephen Fincher of Tennessee, posted the rant on Facebook before she took it down. It was saved and copied.

“Dear Sasha and Malia,” she said in the post. “I get you’re both in those awful teen years, but you’re a part of the First Family, try showing a little class.”

“Act like being in the White House matters to you,” she said. “Dress like you deserve respect, not a spot at a bar. And certainly don’t make faces during televised public events.”

When President Obama asked Malia if she wanted to pet the pardoned turkey, she replied, “Nah.”

Lauten also panned President Obama and the first lady for not being good role models.

“I wanted to take a moment and apologize for a post I made on Facebook earlier today judging Sasha and Malia Obama at the annual White House turkey pardoning ceremony,” she wrote.

“When I first posted on Facebook I reacted to an article and I quickly judged the two young ladies in a way that I would never have wanted to be judged myself as a teenager,” she added. “After many hours of prayer, talking to my parents ,and re-reading my words online I can see more clearly just how hurtful my words were.”

She added that “I’d like to apologize to all of those who I have hurt and offended with my words.”

Some people weren’t impressed with the apology. “SMH too little too late,” wrote one person.

Added another: “They were your TRUE FEELINGS and apologizing after the fact doesn’t change that! You are despicable as a female,” wrote another.

Said one person on MailOnline, “So so sad the a grown woman needs to bully children – I can’t stand how BOTH parties have ignored talking about policies and continue the personal assassinations – but to pick on the children, that is really really low. She should lose her job.”