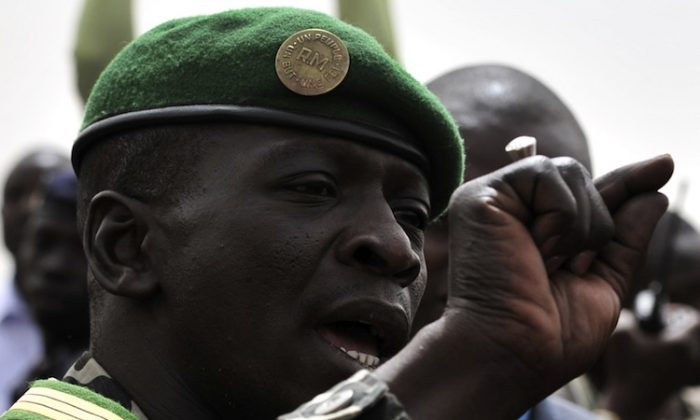 The main Tuareg-led rebel group that launched attacks across northern Mali announced a ceasefire with government forces on Thursday, just a day after the United Nations called for one.

A spokesperson with the National Movement for the Liberation of the AZAWAD (MNLA) rebel group, which is seeking control of its ancestral homeland, said it had reached its goal after taking a number of cities, including ancient Timbuktu.

“Since the day before yesterday when our units reached Douentza, which we consider to be the frontier [of the AZAWAD region], the military offensive is declared over,” said Paris-based spokesperson Moussa Ag Assarid, reported Al Jazeera.

It is unclear if the Islamist group Ansar Dine, which reportedly fought alongside the Tuareg rebels, will stop fighting. Ansar Dine has been linked to an al-Qaeda branch in North Africa and has imposed sharia law in some cities.

Two weeks ago, a coup led by mid-ranked officer Captain Amadou Sanogo overthrew the Mali government, citing what he described as incompetence in dealing with the Tuaregs. Sanogo called on regional and international powers to help Mali deal with the rebellion, but has received no help.

Instead, the coup served to embolden the rebels to launch even more brazen attacks on several cities, and now control an area geographically larger than France. Al Jazeera reported that only around 1,000 fighters comprise the Tuareg army, of which some members fought in the Libyan civil war last year.

Sanogo, in an interview with French newspaper Liberation, said that “the doors of dialogue” with the rebels are open, “but we will not negotiate the integrity of Malian territory.”

He added that the insurrection in the northern part of Mali “is no longer a mere rebellion” but is comprised of “Islamist groups who have settled in the north.” If the militants are left to their devices, Sanogo said, “Africa and the world will suffer the consequences.”

The regional Economic Community of West African States (ECOWAS) bloc imposed a trade embargo on Mali earlier this week, urging its leaders to restore democracy and uphold the constitution.

Alain Juppe, the foreign minister of France, one of the main monetary backers of Mali before the coup, said on Thursday that France is “strongly pressuring the rebels and coup leaders to end the crisis,” according to a statement. He rejected the idea that France should militarily intervene to put an end to the rebellion.

“We support all ECOWAS efforts, including preparations for a military action,” he said, referring to reports that countries in the bloc will put their militaries on standby to deal with the Tuareg insurrection if need be.

Amid all the infighting, the U.N. Security Council on Wednesday expressed concerns over the deteriorating humanitarian situation in Mali.

In a statement, a Security Council official, Ambassador Jeffrey DeLaurentis, called on all parties involved “to allow timely, safe and unimpeded access of humanitarian aid to civilians in need.”

Battles in the north have displaced more than 200,000 people since January, with around 93,000 internally displaced.

The Council added that there is need for “an increased mobilization of the international community to support humanitarian efforts” and was alarmed over reports that al-Qaeda was operating in tandem with the Tuareg rebels.