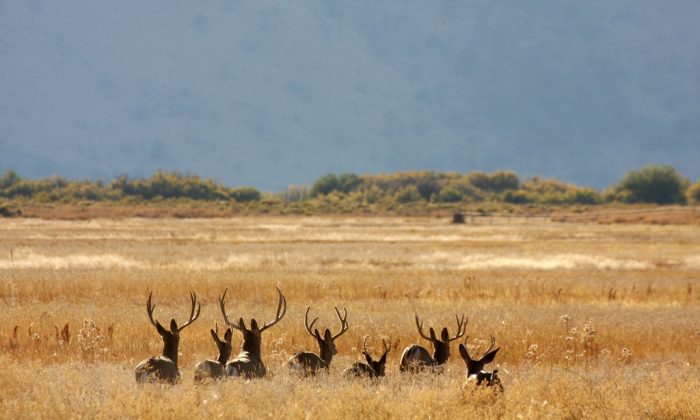 The Malheur National Wildlife Refuge is part of a complicated history of land in the western U.S. (U.S. Fish and Wildlife Service, CC BY-SA)
Opinion

The Malheur National Wildlife Refuge, a 187,757-acre haven for greater sandhill cranes and other native birds in eastern Oregon, is usually a pretty peaceful place. But its calm was shattered on Saturday, Jan. 2, when Ammon Bundy and a group of armed men broke into and occupied a number of federal buildings on the refuge, vowing to fight should the government try to arrest them.

Their insurrectionary goal appears to be, simply put, to destroy the national system of public lands—our forests, parks, and refuges—that was developed in the late 19th century to conserve these special landscapes and the critical natural resources they contain for all Americans.

“The best possible outcome,” trumpeted Bundy, son of Cliven Bundy, who began an armed standoff with law enforcement in Nevada in April 2014 over his continued failure to pay $1 million in fees for grazing on public lands, is that “ranchers that have been kicked out of the area … will come back and reclaim their land, and the wildlife refuge will be shut down forever, and the federal government will relinquish such control.”

Theirs was not a rebellion, Bundy declared. “What we’re doing is in accordance with the Constitution, which is the supreme law of the land.”

He could not be more wrong. To understand why requires a basic understanding of the region’s complex and troubling history and the legal authority under which the federal land management agencies operate.

The first people to live off this land, after all, were the Paiute. For millennia, and thus long before settler-colonists arrived in the region, the Paiute hunted, fished, and gathered in this fertile, albeit arid, terrain. Their remarkable ecological adaptability, observes historian Nancy Langston in Where the Land and Water Meet (2003), the definitive study of the Malheur Basin, helped the colonists rationalize their post-Civil War eviction: “Whites looked at the Paiutes and believed they saw a people who had no fixed habitation, no material culture, no cultivation, no livestock, no homes, and no real claim to humanness.”

Battered into submission, crowded into a reservation, and prohibited from acting on their treaty rights to hunt and fish off-reservation, in 1878, the Paiute fought back. Their brief uprising was crushed, and the consequences were grim: Their local reservation was shut down, and its lands returned to the public domain.

Under armed guard, the Paiute were marched through the snow 350 miles to the Yakama Reservation in southeastern Washington state. Having inhabited the Malheur for 13 centuries, they knew full well the meaning of the French word applied to their homeland—misfortune, adversity.

The land suffered, too. As Langston points out, it is no coincidence that dispossessing the Paiute allowed large livestock operations to take over, resulting in the rapid deterioration of grazing lands in the upper reaches of the Silvies and Blitzen rivers that flow into Malheur Lake.

Further diminishing the lake’s capacity to sustain migratory and local bird populations were the irrigation and drainage projects that the Bureau of Reclamation, founded in 1902 to manage water to boost economic development in the arid West, built upstream.

Add to this environmental degradation the reckless hunt for bird plumage: Late-19th-century fashionistas coveted the white heron’s graceful feathers to adorn their hats. With gold rush-like avarice, local hunters blazed away, and within a few years, the Malheur heron population was decimated.

It was their extirpation—not the brutal mistreatment of the Paiutes—that caught the attention of the Oregon Audubon Society. The society’s activists pleaded with former rancher and conservationist-in-chief President Theodore Roosevelt, to protect those lands still in federal ownership. On Aug. 18, 1908, he complied, signing an executive order establishing the 81,786-acre Malheur Lake Refuge, which also encompassed nearby Haney and Mud Lakes “as a preserve and breeding ground for native birds.”

Since then, the refuge has expanded by 100,000 acres. In 1935, the Swift Meatpacking Corporation sold 65,000 acres to the federal government, funding for which came from Duck Stamp sales and New Deal monies. Over the years, willing sellers added the remaining acres to the refuge’s expanse. Ammon Bundy’s protestations to the contrary, no ranchers were ever evicted from the refuge.

Bundy’s militant bluster about restoring the Constitution by tossing the federal government off the Malheur and other public lands because this land belongs to settler descendants is just as disingenuous.

Indeed, in 1911 in a pair of landmark decisions—Light v U.S. and U.S. v Grimaud—the Supreme Court asserted that the public lands were, in fact, public; that federal ownership of them was indisputable; and that Congress through a series of legislative acts had granted the Executive Branch, and by extension the federal land management agencies, administrative authority to manage these acres in accordance with the relevant rules and regulations.

Both cases emerged out of the first Sagebrush Rebellion of the early 20th century. Western livestock, mineral, and timber interests had exploded in anger at the redesignation of portions of the public domain into the national forests and the regulations that the newly created U.S. Forest Service enacted on grazing, mining, and logging. What changed was that ranchers, miners, and loggers were required to pay a small fee to access the relevant resources that once they simply harvested for free.

As these special interests and their political minions lashed out, harassing rangers and threatening to rebel against the nation-state, they sought test cases to undercut the federal agency’s regulatory authority.

The Forest Service also had its day in court in hopes of establishing precedent for its managerial actions. It found them when Colorado cattleman Fred Light and California shepherd Pierre Grimaud were caught illegally grazing their herds on national forest land.

The Colorado legislature even paid all Light’s legal expenses in hopes of proving its point that states, not the federal government, had sovereignty over the public lands within their borders. In May 1911, a highly conservative Supreme Court disagreed, ruling unanimously in the Forest Service’s favor.

This precedent should have put an end to such challenges, but subsequent generations of would-be Sagebrushers have adopted the same hostile anti-federal rhetoric and oft-violent tactics.

There were outbreaks in the 1920s, 1940s, and 1950s. During the Reagan and Bush administrations, fueled by vitriolic talk-show disdain for Washington, Nevada county commissioners crashed bulldozers through Forest Service fences to claim “ownership.” Elsewhere, ranger offices were firebombed and agency equipment vandalized.

More recently, in 2010, the Utah legislature asserted that it would use eminent domain to take over national monuments, grasslands, and forests, believing, as did the Colorado legislature a century ago, that its sovereignty superseded the federal government’s.

Four years later, Nevada rancher Cliven Bundy declared federal sovereignty null and void, refused to pay his grassland-leasing fees, and took up arms to face down the feds. His son’s occupation of the Malheur National Wildlife Refuge is but the latest in a long line of such confrontations.

Yet none of these persistent attacks has succeeded in dismantling the federal land management agencies or the Supreme Court precedents that sanction their actions, a critical lesson from this contested past that Ammon Bundy and his co-conspirators willfully ignore.

Char Miller is a professor of environmental analysis at Pomona College. This article was previously published on TheConversation.com