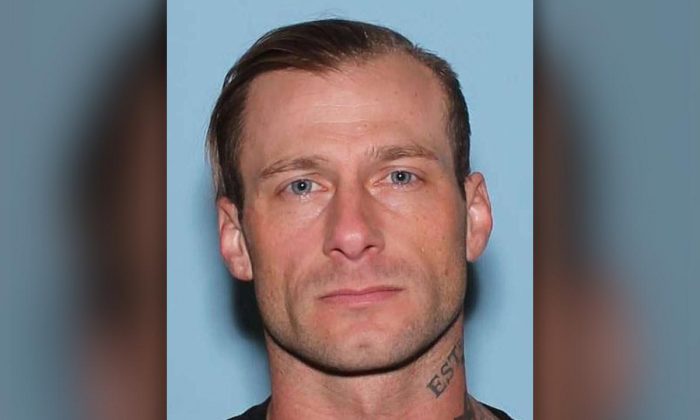 David Byers, 35, faces up to 20 years in prison for a string of robberies in the northeast United States. (Yuma Police Department)
Crime and Incidents

David Byers had a good career as a fitness model, but he wanted to branch out a little.

He decided that a part-time job as a robber would be just what his resume needed.

The 35-year-old Californian traveled to the Northeast and set out on his new career.

He started small, wrapping a bandana around his face and showing a gun in his first holdup at a gas station in Nesconset, Long Island, on April 19. He got away with $300.

Byers then headed to Stony Brook, New York, where the next day he hit up a Chase Bank for $2,107.

Four days later, he hit up another gas station, this one in Greenwich, Connecticut, for $223. While still in Greenwich, he robbed another Chase Bank—twice, on consecutive days.

Instagram removed my photo of David. I hope this one is okay. Jeez!

Byers went to the same teller for both robberies. The second time he told the teller, “You know why I’m here,” reported the New York Daily News.

At all these robberies he showed what looked like the butt of a handgun.

As part of his plea deal, he will have to pay nearly $15,000 in restitution, according to the Daily Mail.

Looking for Love and Money

A friend of Byers told CBS8 News that the former model traveled across the country from his home in Solana Beach to try to meet up with an old girlfriend who now lives in New York. He emailed the woman after starting his crime spree, allegedly sending her a photo of himself with stacks of stolen money, a criminal complaint says, according to Greenwich Time.

Police nearly nabbed Byers in Greenwich when they saw him driving, but he drove away at a “high rate of speed,” according to the Justice Department, and fled on foot, evading capture.

Chase Bank Robbery suspect image was obtained from a nearby establishment. Contact tipline with info 1(800)372-1176 or tips@greenwichct.org pic.twitter.com/HegPBkuUn5

He traveled about three miles to Port Chester, New York, where he pretended to be a valet parking lot attendant and drove off in a black Range Rover after he changed the license plates.

After Pennsylvania State Police tried to stop him using a tire deflating device, the Justice Department said he abandoned the vehicle and continued his escape on foot into a residential neighborhood. There he stole a truck that had the keys in it, later disguising it with Maryland license plates he stole at a rest stop.

He made it as far as Arizona in that vehicle, but Arizona police noticed it was stolen and gave chase. He was again able to evade capture through aggressive driving, and again ditched the vehicle and fled on foot.

Somehow Byers made it all the way back to his home in San Diego, where he was arrested outside a convenience store on May 2 by a team of FBI agents.

He was extradited in August, Greenwich Time reports, and on Nov. 7, faced a judge in Hartford, Connecticut, where he accepted a plea deal after pleading guilty to charges of first-degree robbery and felony reckless endangerment.

Byers faces as many as 20 years in prison for his crimes. Sentencing is set to begin on Jan. 30.

A friend of the heavily tattooed model and personal trainer was shocked to hear about his criminal escapades.

Photographer Michael Stokes featured Byers in his Instagram portfolio, which has 158,000 followers.

“I know he’s an unusual guy, but bank robbery doesn’t seem like his thing,” Stokes told the Greenwich Time. “He’s always been so decent and respectful with me.”

Besides being a fitness model and a personal trainer, Byers was also part-owner of a gym, Greenwich Time reports. He faced several charges for stealing gym equipment in California, and his extradition had to be delayed while San Diego’s justice system dealt with those charges.

He eventually pleaded guilty to burglary in that case.

He had prior arrests for resisting arrest and driving under the influence, Greenwich Time reports.