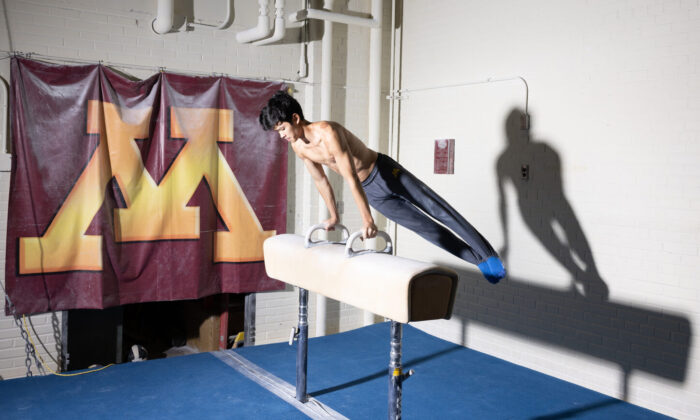 Student Evan Ng, a gymnast, practices at the University of Minnesota in this undated photo. He is suing the school, claiming the elimination of its century-old gymnastics team is illegal sex-based discrimination. (Courtesy Pacific Legal Foundation)
Judiciary

A student gymnast at the University of Minnesota is suing the school for sex-based discrimination after it cut the men’s varsity gymnastics team because it believes too many men participate in campus sports, given that female students outnumber males.

The complaint initiating the lawsuit, Ng v. Board of Regents of the University of Minnesota, was filed on Oct. 29 in U.S. District Court in the District of Minnesota.

Ng, 19, has been a competitive gymnast since he was 6 years old. By the age of 9, he was competing on the national Future Stars Junior Elite (JE) team and became a five-time JE national qualifier and an all-around Regional Champion in 2019.

“It’s a sport like no other,” Ng said in a statement provided by PLF.

He passed up a more lucrative financial aid offer from another university to attend the University of Minnesota and compete on its 118-year-old gymnastics team. But his dreams were crushed when the school decided to eliminate men’s gymnastics after the 2020–21 school year.

“Losing the team hurt, but the reason stung even more,” a PLF-provided narrative reads.

“It wasn’t poor athletic performance—the Golden Gophers finished with a season high in overall points, and national titles on parallel bars and still rings. Nor was it subpar academic performance—the team had the highest grade-point average of any sport for the spring 2021 semester, with five members earning 4.0s.”

PLF attorney Caleb Trotter told The Epoch Times that the decision to do away with the team was made in October 2020, “but it didn’t become effective until April of this year, once the season ended, which ironically, [is when] Minnesota hosted the NCAA championships for men’s gymnastics.” The team finished at No. 5 nationally, “and then once that was over their program was no more.”

“They even sent one of their athletes to the Tokyo Olympics this year,” Trotter said.

At the same time the school cut men’s gymnastics, it also cut the men’s tennis team and the men’s indoor track and field teams, he said.

According to PLF, the school’s initial claim that it was getting rid of the team for financial reasons was false. Eliminating men’s gymnastics would save around $825,000, but the gymnastics program’s endowment of more than $900,000 largely covers the team’s scholarships.

The university cut the team based on its leadership’s belief that the federal Title IX law requires parity between the sexes in collegiate sports.

Title IX refers to the federal Education Amendments of 1972, which amended four federal education-related statutes. Recipients of federal financial assistance, which is virtually every college and university in the United States, cannot discriminate on the basis of sex in their programs and activities, including athletics.

The university cut the team based on its misguided understanding that “Title IX requires it to have statistical parity between its ratio of male and female athletes for that ratio to be identical to its male and female ratio of undergraduates enrolled in the university,” Trotter said.

“Our view is that that creates impermissible sex-based quotas that violate the Constitution, the 14th Amendment’s Equal Protection Clause, but also the Title IX statute itself,” he said. “They’re essentially looking at individuals as numbers on a ledger, and they need X number of men, they need X number of women.”

For the 2020–21 school year, men were at a greater percentage of athletes (49.76 percent) than in overall undergraduate enrollment (46.77 percent), meaning that, in the university’s eyes, male athletes were overrepresented by 2.99 percent.

That tiny disparity shouldn’t trigger red flags, according to PLF, and the Department of Education’s Office of Civil Rights found nothing wrong with the university’s 1.47 percent overrepresentation of women athletes in 2018.

The school would have to meet “a very high burden” to prevail, Trotter said, adding that Title IX doesn’t say what the university claims it says.

“The statute itself says any statistical imbalance is not grounds for a finding of discrimination,” he said.

A spokesman for the University of Minnesota told The Epoch Times that the school did what was legally required.

“The decision to eliminate three intercollegiate sports programs was a difficult one,” spokesman Jake Ricker said in an email.

“Importantly, this lawsuit isn’t just about the University. It is a broad challenge to how Title IX has been implemented by the U.S. government across colleges and Universities nationwide to achieve equal opportunity. The University has and will always honor its legal obligations.”