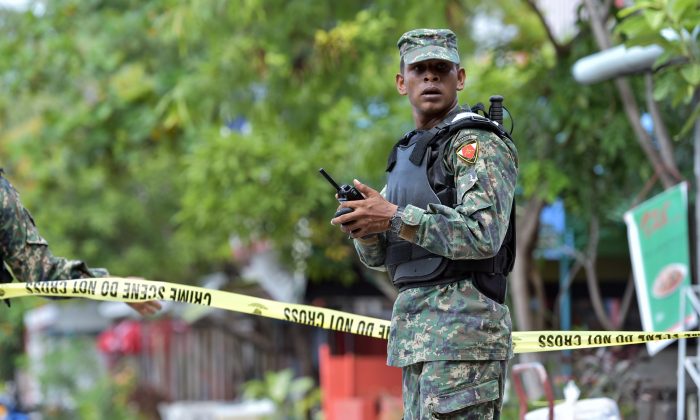 A Maldivian army officer stands guard at a cordoned off area after news of a suspected bomb being found near the harbor area, which turned out to be a false alarm, in Male, Maldives, Thursday, Nov. 5, 2015. (AP Photo/Mohamed Sharuhaan)
Asia & Pacific

MALE, Maldives—The president of the Maldives on Tuesday revoked a state of emergency after less than a week, following widespread international condemnation and concerns about its impact on the country’s crucial tourism industry, the government said.

President Yameen Abdul Gayoom declared the state of emergency last Wednesday, citing a security threat following a September blast on his speedboat and the subsequent recovery of weapons and a homemade bomb near his official residence.

The declaration was widely condemned for suspending basic citizens’ rights and giving the military and police power to search and arrest almost at will.

Under the emergency regulations, police were allowed to enter and search homes without a warrant, and the rights to assemble peacefully and travel between the many islands of the archipelago nation were suspended.

Lawmakers voted Vice President Ahmed Adeeb out of office using the regulations. Authorities suspect that Adeeb was behind the alleged attempts on Gayoom’s life, and he has been arrested and detained.

Gayoom was not hurt in the Sept. 28 blast aboard his boat, but his wife, an aide and a bodyguard were injured.

The foreign ministry issued a statement Tuesday saying the government had lifted the state of emergency “with immediate effect.”

“With the lifting of the state of emergency, all fundamental rights that were suspended have been restored,” the statement said.

Attorney General Mohamed Anil said the president decided to revoke the state of emergency because investigations into the blast and the recovery of weapons and explosives have made good progress. He also said Gayoom had heeded international calls for the declaration to be lifted and wanted to reduce any impact the emergency may have had on tourism.

It is not clear how much of an impact the state of emergency has had on the tourism industry in the Maldives, which is best known for its luxury tourist resorts.

Malaysia Says Most of the Debris in Maldives Not From Plane

The main opposition Maldivian Democratic Party welcomed Tuesday’s move, but said declaring the state of emergency in the first place was political, designed to stop a rally planned for last Friday demanding the release of the party’s leader, former President Mohamed Nasheed.

“It appears that Yameen is willing to make up threats about the nation’s security in order to settle political scores,” the party said in a statement, referring to the president. “Yameen’s increasingly erratic, paranoid and dangerous behavior is damaging the country and proves he is unfit to be president. He has failed and should step down.”

The Maldives has had a difficult transition to democracy since holding its first multiparty election in 2008.