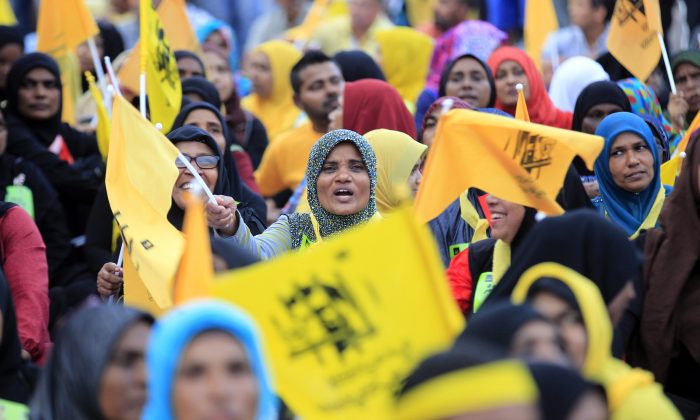 Supporters of former Maldivian president Mohamed Nasheed participate in a protest rally in Male, Maldives, Friday, Nov. 27, 2015. Hundreds of opposition supporters have started a three-day long protest demanding the release of the country’s ex-president and other politicians and activists in jail. (AP Photo/Sinan Hussain)
Asia & Pacific

Maldives Police Break Up Opposition Protest for a 2nd Day

COLOMBO, Sri Lanka—Police in the Maldives dispersed opposition protesters for a second straight day Saturday, using tear gas and pepper spray and arresting more than a dozen demonstrators demanding the release of a former president and other jailed political leaders.

After Friday’s protest was shut down, the opposition Maldivian Democratic Party vowed to regroup Saturday, saying it was within its legal rights to continue the protests because police had unilaterally withdrawn from agreed-upon terms for a 72-hour demonstration.

The party is demanding the release from jail of former President Mohamed Nasheed, ex-Defense Minister Mohamed Nazim and opposition leader Sheik Imran Abdulla, as well as the end of court actions against 1,700 political activists.

It says the actions against the leaders and activists are part of a political vendetta by the current President Yameen Abdul Gayoom.

Police used pepper spray Friday night to disperse protesters as they prepared for a street march. They also cut off electricity for the campaign site.

On Saturday, police used tear gas and pepper spray against the protesters, and said they had arrested 13 demonstrators.

Maldivian Democratic Party spokesman Hamid Abdul Gaffoor said the police had initially agreed to allow a three-day protest as long as sound systems were not used after midnight. However, they withdrew their permission after the government interfered, he said.

Government officials could not be reached immediately for comment.

Nasheed was sentenced to 13 years in prison for ordering the arrest of a top judge in 2012, when he was president. Nazim is serving a 10-year sentence for illegal possession of a pistol, and Abdulla has been detained for allegedly inciting violence at an anti-government protest in May.

The Maldives, known mainly for its pristine beaches and luxury island resorts, became a multiparty democracy in 2008, but democratic gains have been shrinking fast.

Nasheed, the Indian Ocean archipelago’s first democratically elected president, resigned four years into his five-year term amid protests against his role in the arrest of the judge. Gayoom, a half-brother of the Maldives’ former 30-year autocrat, defeated Nasheed in a disputed election in 2013.

The Maldives’ judiciary, police and bureaucracy are deemed highly politicized and are accused of being used by Gayoom to crack down on the opposition.