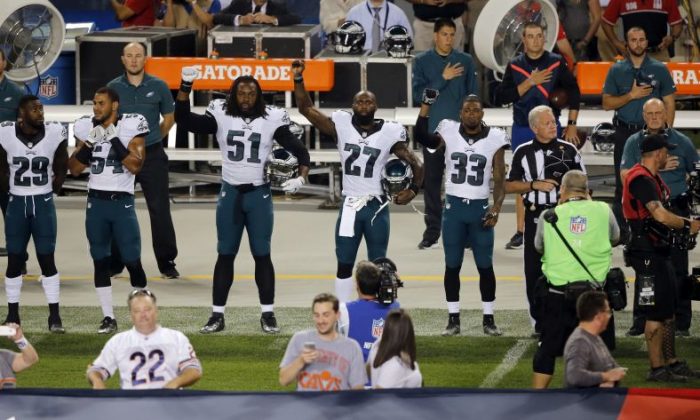 CHICAGO—Philadelphia Eagles safety Malcolm Jenkins and several teammates raised their right fists during the national anthem in a protest prior to their game against the Chicago Bears at Soldier Field.

Jenkins said Saturday he would lead teammates in a demonstration against social injustice. Cornerback Ron Brooks and defensive end Steven Means joined him. It was not clear if another Eagles player joined in.

Jenkins had insisted the protest would not be “an anti-police thing” and that police “are a key part of the solution in this issue.”

A Pro Bowl safety last season, he said the team didn’t protest before the season opener last week out of respect because it was 9/11. He said he’s spoken to 49ers backup quarterback Colin Kaepernick.

“There’s just a lot of things systematically that have been set up in this country since its inception that really … put minorities, especially African Americans, at a disadvantage when you talk about quality of life and actually growing in this country,” Jenkins said on Friday on radio station WIP-FM in Philadelphia, according to USA Today. “So we want to continue to keep that conversation going, push it to as many people as we can, obviously while also doing our part in bringing forth change.”