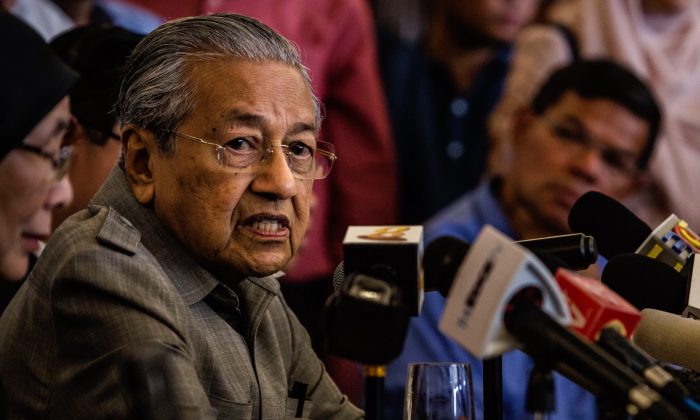 Mahathir Mohamad, chairman of 'Pakatan Harapan' (The Alliance of Hope), speaks during press conference following the 14th general election on May 10, 2018 in Kuala Lumpur, Malaysia, on May 10, 2018. (Ulet Ifansasti/Getty Images)
Asia & Pacific

Malaysia’s two-time prime minister Mahathir Mohamad was admitted to the National Heart Insitute in Kuala Lumpur on Thursday for “a full medical check-up” and will be staying in the hospital for a few days, according to a statement shared on his Twitter account.

The 96-year-old politician arrived at the hospital at around 7 p.m. on Thursday and is expected to stay there over the next few days for “further observation,” the statement reads.

In 2018, Mahathir said in an interview with state media that he “would have gone down with the first heart attack” if it hadn’t been for medical advances.

“I still remember, the American cardiologist shook my hand on the morning of the surgery and said ‘Yahya, if you need medical asylum you can come to America,” Mahathir was quoted saying by state media Malaysiakini.

Mahathir served as Malaysian prime minister for 22 years, from 1981 to 2003, making him the country’s longest-serving prime minister. He became prime minister for the second time after winning the 2018 elections at the age of 92, before stepping down in February last year due to political turmoil.