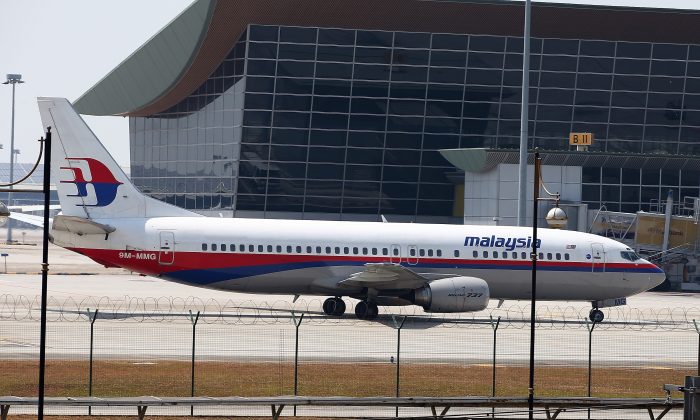 Malaysia Airline passenger jets are shown parked on the tarmac at the Kuala Lumpur International Airport in Kuala Lumpur, Malaysia on Mar. 8, 2014 (How Foo Yeen/Getty Images)
By Wire Service

Malaysian Prime Minister Mahathir Mohamad has promised to continue the search for missing Malaysia Airlines Flight 370, almost five years to the day since it disappeared.

Speaking to CNN affiliate 9 News Australia, Mahathir said “For as long as there is hope, we will continue to think of ways and means to find out” the plane’s fate.

“We intend to continue” the search, he told Danica Weeks, whose husband Paul was one of 239 on board the plane when it vanished in 2014 en route from Kuala Lumpur to Beijing, in what has become one of the world’s biggest aviation mysteries.

“Losing an aircraft is one thing, but losing people is something else,” Mahathir said. “You can’t sleep thinking about what has happened, you keep on asking yourself that question and you get no answer.”

The official search for MH370, carried out by Malaysia, China, and Australia, was called off in January 2017, after costing upward of $150 million. A second search, carried out on a no-find, no-fee basis by US-based company Ocean Infinity, ended last year after a fruitless 90-day sweep of the southern Indian Ocean.

Ocean Infinity said it had covered 112,000 square kilometers of the ocean floor, but ultimately found nothing.

In July last year, Malaysian authorities said they had failed to determine the cause of the plane’s disappearance, though they did rule out several possibilities.

Speaking at a press conference near the capital Kuala Lumpur, lead investigator Kok Soo Chon said MH370 turned back toward Malaysia under manual control, but it could not be determined whether the plane was being flown by the pilot or if there had been any unlawful interference.

Chon went on to rule out other factors that had been questioned in the demise of the flight, including the pilot’s mental state, aircraft malfunction, or remote control of operation systems.

“The disappearance of MH370 and the search effort are unprecedented in commercial aviation history,” the Malaysian report said.

“Improvements must be undertaken to ensure that this type of event is identified as soon as possible, and mechanisms are in place to track an aircraft that is not following its filed flight plan for any reason.”

In the interview with Australia’s “60 Minutes,” Mahathir said, “One of the things that I heard from the beginning was that the plane was hijacked.”

“But a plane of this size going down into the sea or land must leave signs. It’s as if the plane just vanished,” he said.

So far, the only sign of the aircraft has been debris that washed up in eastern Africa and nearby islands, far from where experts believed the flight disappeared. A wing fragment and part of the plane’s flaperon, which is on the wing, are among the remnants that have turned up.

Mahathir dismissed speculation over the role of the plane’s pilot in the disappearance, pointing to the man’s long career and lack of a clear motivation.

“I cannot think that a person who has been flying for so long, a very senior pilot, would do that,” he said.

Speaking at an event on Sunday, Malaysian Transport Minister Anthony Loke said, “If there is a proposal and credible leads, then we are prepared to look at it. It’s not as if we are sitting here and doing nothing.”

“If (Ocean Infinity) can convince us that the new technology can be more efficient for the search, then we are more than willing to restart it,” he said, according to local media. “And if there is a ‘no find, no fee’ proposal, then we are prepared to look at it.”

At the end of her meeting with Mahathir, Weeks, the MH370 families advocate, told him, “Please don’t give up on us.”