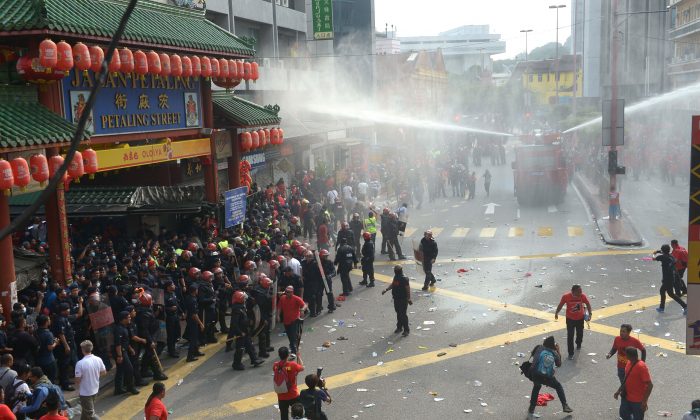 KUALA LUMPUR, Malaysia—Police fired water cannons at ethnic Malays who turned unruly Wednesday at a pro-government rally that many fear has the potential to provoke racial trouble in this multiethnic nation with large Chinese and Indian minorities.

The rally — a collection of several marches that converged on a central field near Parliament — was ostensibly called to emphasize the dominance of Malays in Malaysia, as well as to support the government of Prime Minister Najib Razak, who is under pressure to resign over a $700 million financial scandal. But the rally is also being seen as a challenge to the Chinese and Indians, who had gathered in large numbers in an anti-Najib rally on Aug. 29 and 30.

Unlike that rally, which was banned by the police, the Malay parade on Wednesday was allowed to go ahead by authorities, albeit with a warning that the demonstrators would not be allowed to carry banners or posters with racial overtones.

“I am here to defend Malay dignity and dominance,” said Rahamah Abdul Majid, one of the protesters. “We must not let others take over our country.”

Other demonstrators blew horns and chanted “Long live the Malays.” Some carried banners that read, “People unite to defend the government of the people’s choice.”

Most of the thousands of red-shirted protesters taking part in the rally demonstrated peacefully at the grounds near Parliament. But a small group threw plastic bottles at police and tried to push their way through barricades into Kuala Lumpur’s Chinatown, shouting “This is Malay land.” Riot police retaliated by firing chemical-laced water from a fire truck.

The rally included Cabinet members and leaders from Najib’s ruling United Malays National Organization, or UMNO party, the dominant group in the ruling coalition that has held power since independence in 1957.

It draws its support from the Malay Muslims, who form about 60 percent of the country’s 30 million people. Many see themselves as the rightful owners of Malaysia’s history, heritage and governmental power. The other name for the Malays, Bumiputras, means sons of the soil.

Some Bumiputras see the Chinese, who represent 25 percent of Malaysia’s population, and the Indians, who comprise 10 percent, as outsiders because they are not the original inhabitants and came as traders, laborers, plantation workers and civil servants during the British colonial period and in earlier waves of migration.

Although some Malays also oppose Najib, most of the Chinese and Indians have moved away from supporting his government in recent years.

Deputy Trade Minister Ahmad Maslan, who is also information chief of the UMNO, told local media that he joined the rally Wednesday as a “show of support for the government” amid challenges including the local currency’s sharp plunge. The Malaysian ringgit is down 26 percent from a year earlier, breaching 4 ringgit to the dollar last month, its weakest level in 17 years.

Najib, who came to power in 2009, did not openly endorse the rally, but has said he would not stop UMNO members from joining.

The prime minister has been fighting for political survival after leaked documents in July showed he received some $700 million in his private accounts from entities linked to indebted state fund 1MDB.

He later said the money was a donation from the Middle East and fired his deputy, who was critical of him, four other Cabinet members and the attorney general investigating him. He is also saddled with allegations of mismanagement at 1MDB.

Najib has vowed he won’t quit and said Malaysia is not a failed state.

James Chin, who heads the Asia Institute at Australia’s University of Tasmania, said the rally showed that the UMNO, which heads a multiethnic coalition, was using the racial card to muster support for the party. “It’s a distraction from Najib and the 1MDB issue,” he said.

Support for Najib’s National Front has eroded in the last two general elections. It won in 2013, but lost the popular vote for the first time to an opposition alliance.