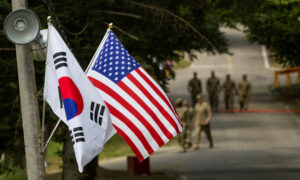 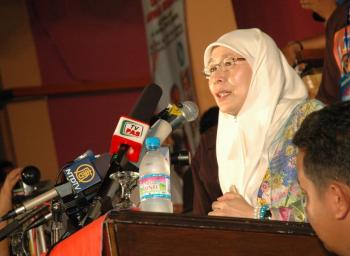 By William Teh
biggersmaller
Print

Malaysia’s opposition leader Wan Azizah has resigned her parliamentary seat of Permatang Pauh to make way for her husband, Anwar Ibrahim, former Deputy Prime Minister to return to the Parliament. It is a step forward for Anwar to seize power to form a new government this year.

Wan Azizah, who is also the unprecedented female opposition leader in the parliament of Malaysia history, said the decision was made after deliberating with her family, the party leadership and partners in the Pakatan Rakyat (People’s Pact). She had earlier submitted her official resignation to Parliamentary Speaker Tan Sri Pandikar Amin Mulia, to make way for her husband Anwar Ibrahim to contest as a candidate for People’s Pact in a by-election as soon as possible.

“This is consistent with our goals towards securing a parliamentary majority and forming a new government within this year,”

“This is the right decision for Malaysia,” said Wan Azizah.

She also commented, “The nation now faces some of the greatest challenges it has encountered since gaining independence. The UMNO-led Barisan Nasional government has mismanaged the economy and steered the nation towards a catastrophe. It has allowed the integrity of the justice system to fall into deeper infamy. It has stroked the flames of racism and driven a wedge of mistrust between Malays, Chinese and Indians, while thoroughly neglecting the needs of the indigenous peoples of Sabah and Sarawak.”

Wan Azizah praised her husband, Anwar Ibrahim to have “articulated a vision for Malaysia that has brought hope to the people. He has the experience and intelligence to reinvigorate our economy, and the charisma and integrity to unite the Malaysian people and restore credibility to our institutions of governance.”

Permatang Pauh is Anwar’s stronghold.  In 1982, Anwar first contested and won in Permatang Pauh, a seat he subsequently held for 17 years until the sacking by his former mentor turned opponent Tun Dr Mahathir Mohamad (the former Prime Minister) in 1998.  Anwar was accused of corruption and sodomy.  In 1999 general election, Dr. Wan Azizah, in the spirit of her husband, contested and won the seat.  She subsequently secured the Permatang Pauh seat for the last two elections until vacating it on Thursday, July 31.  Dr Wan Azizah also thanked her supporters in Permatang Pauh who had stood by her in the most difficult of times since September 1998.

Despite her resignation as an MP, she will continue to serve as president of Parti Keadilan Rakyat and as chairperson of the Yayasan Aman (Peace Foundation).

According to the constitution of Malaysia, the Election Commission (EC) has to call a by-election within 60 days of being notified by the Parliament (Dewan Rakyat) Speaker.

Anwar said he hoped that the Election Commission would conduct the by-election professionally and that he looked forward to participating in Parliament.

When asked if he was afraid of being arrested following rumours that his arrest was imminent, Anwar said he could not comment on rumours and appeared calm.  But, he claimed he is being monitored very closely.  He revealed that at least seven special branch cars were deployed by the police during his recent trip to Pahang.

Datuk Seri Anwar Ibrahim is the de facto leader of Parti Keadilan Rakyat (People’s Justice Party).  He served as the Deputy Prime Minister between 1993 and 1998.  Anwar was also appointed as Finance Minister from 1991 until 1998.  In 1998, Anwar’s attempt to reform the country's governing mechanisms worried the then Prime Minister Tun Dr Mahathir, who had started to lose control of the country’s administration.  Mahathir accused Anwar of alleged homosexual acts and sacked him.  He was then prosecuted for corruption and sodomy by Mahathir’s government.  Anwar was later sentenced in a highly controversial trial to 6 years imprisonment on 14th April 1999 for corruption, and 8th August 2000, to another nine years for sodomy.

However, on 2nd September 2004, Malaysia's highest court, the Federal Court reversed the second conviction and he was released.  Taking into account of public holidays and good behaviour, Anwar’s sentenced was effectively completed on 14th April 2003.  Under the law of Malaysia, a person who is sentenced to more than 1 year imprisonment or fined in excess of RM2,000 and not released on bail, is banned from political activities for five years after the end of his sentence.  This relegated Anwar to the sidelines of Malaysian politics until April 14, 2008

Barisan Nasional (BN) called for early general election on 8th March 2008 in a bid to deny Anwar's plans for a return to Parliament.  In light of increasing public unrest on ever increasing inflation, the opposition seized over a third of parliamentary seats and five states in the worst ever showing for the Barisan Nasional coalition that has ruled for half a century.  The opposition parties later formed a coalition, Pakatan Rakyat (Peoples’ Coalition).  This election was later known as “political tsunami” for the country.

PKR won a total of 31 Parliamentary seats in 8th March election to become the largest opposition party in Parliament.  PKR president Datuk Seri Dr Wan Azizah Wan Ismail, who is Anwar’s wife, was appointed unanimously by the component parties of Pakatan Rakyat to be the first female Opposition Leader in Parliament.