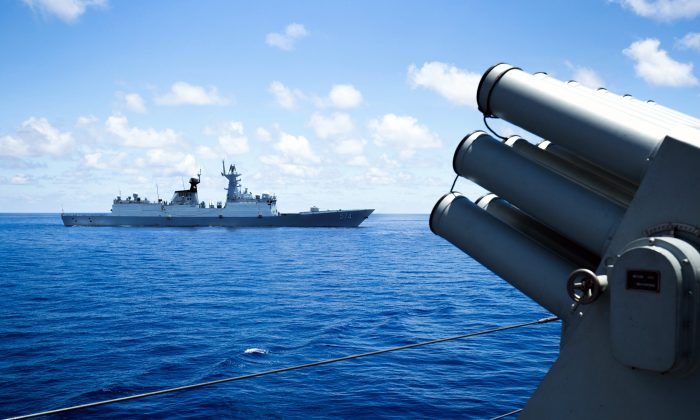 Vessels of China's South Sea Fleet taking part in a logistics supply drill near the James Shoal area on South China Sea on May 10, 2016. The Chinese regime claims sovereignty over almost the whole of the South China Sea, pitting it against several neighbors in the region. (STR/AFP/Getty Images)
Asia & Pacific

Malaysia on Monday summoned the Chinese ambassador for the second time since June to “protest” the presence of Chinese vessels in the country’s exclusive economic zone, the foreign ministry said.

The Malaysian Ministry of Foreign Affairs said in a statement that it called in ambassador Ouyang Yujing to “convey Malaysia’s position” and protest against the “presence and activities” of Beijing’s vessels, including a survey vessel, in Malaysia’s Exclusive Economic Zone off the coasts of the eastern states of Sabah and Sarawak.

It isn’t clear when the Chinese ships were detected in Malaysian waters, or how many vessels were involved.

“The presence and activities of these vessels are inconsistent with Malaysia’s Exclusive Economic Zone Act 1984, as well as the 1982 United Nations Convention on the Law of the Sea (Unclos),” the statement said.

“Malaysia’s consistent position and actions are based on international law, in defence of our sovereignty and sovereign rights in our waters,” the foreign ministry added.

The Chinese embassy in Kuala Lumpur did not immediately respond to a request for comment.

A day earlier, Malaysian Prime Minister Ismail Sabri Yaakob had asserted that the government would not “compromise in terms of our sovereignty” if there is a threat in the South China Sea. He added that he had raised the same point with national representatives multiple times when he was formerly the Minister of Defence.

“In determining Malaysia’s position and course of action with regard to the South China Sea issue, which is complex and involves inter-state relations, Malaysia’s national interests will remain of paramount importance,” the ministry said.

Last week, media reported that a Chinese survey vessel was in Malaysian waters off the coast of Sabah, near a vessel commissioned by Malaysian state energy firm Petronas.

Last year, another Chinese survey ship held a month-long standoff with an oil exploration vessel contracted by Petronas within Malaysia’s exclusive economic zone. China had then said the vessel was conducting normal activities.

Malaysia’s foreign ministry added on Monday that all matters related to the South China Sea must be resolved peacefully and constructively.

“The RMAF confirms the detection of 16 People’s Liberation Army Air Force (PLAAF) aircraft entering the Malaysia Maritime Zone (ZMM) airspace, and that they were flying close to our national airspace,” it said in a statement at the time.

Beijing said that it was part of “routine training.”

China claims almost all of the energy-rich South China Sea, through which about $3 trillion worth of ship-borne trade passes annually.

Malaysia, Brunei, the Philippines, Taiwan, and Vietnam have overlapping claims.

The Philippines and Vietnam have accused China of harassing fishermen and energy activities in South China Sea waters.