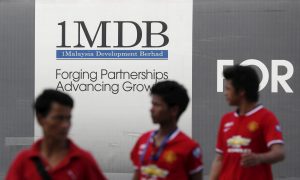 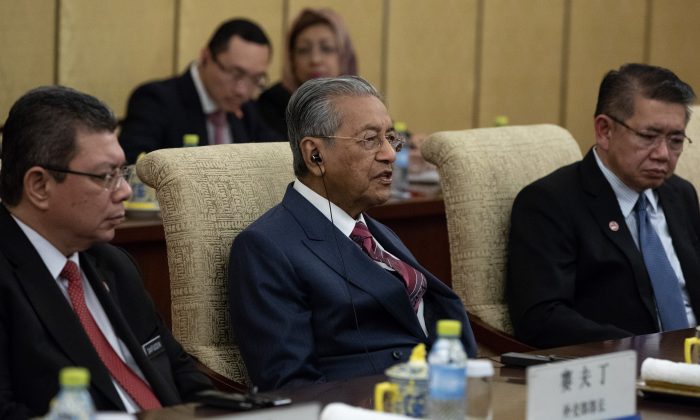 Malaysia’s prime minister has successfully renegotiated a major China-backed rail link project in a deal which will save the country 21.5 billion ringgit ($5.2 billion) in debt to the communist superpower.

“This reduction will surely benefit Malaysia and lighten the burden on the country’s financial position,” it said in a statement.

The proposed 688-kilometer rail link has been reduced to 640 kilometers to cut costs, and is set to connect a major port near Malaysia’s capital Kuala Lumpur to much of the country’s rural states along the east coast.

Mahathir said his government negotiated the new terms of the agreement to prioritize the needs of Malaysians, adding that the initial cost of the rail link was unjustified and unclear.

“It was unjustified—a hefty lump sum price which lacked clarity in terms of technical specifications, price, and, by extension, economic justification,” Mahathir told a press conference on April 15.

“After long and protracted negotiations between the governments of Malaysia and China, both parties reached a mutually beneficial agreement: the improved ECRL deal.”

The move comes after months of negotiations following Mahathir’s decision to cancel the project last year. The agreement was first signed in 2017 under the administration of Datuk Seri Najib tun Razak, Mahathir’s scandal-ridden predecessor.

The 93-year-old leader simultaneously announced the cancellation of the Trans-Sabah Gas Pipeline (TSGP) project on the final day of his official five-day visit to China, saying that his country’s top priority was to minimize its debt and loans.

While the new terms are still being finalised, MRL’s CEO said the project could be funded by an 85 percent loan from China’s EXIM Bank (Export-Import Bank of China). He added that the government is working to reduce the interest rate from the 3.25 percent agreed upon in the original plans.

Mahathir canceled the the ambitious ECRL last year amid concerns that the project made no financial sense for the country.

Alarm bells were triggered after other countries started running into financial difficulty when the construction of their infrastructure projects as part of the Belt and Road Initiative began.

In 2017, Sri Lanka handed over a major strategic port—along with 15,000 acres of land—to China on a 99-year lease after its debts to Chinese state-owned firms ballooned. The Hambantota Port was acquired by China after several months of negotiations and intense pressure to clear $1.4 billion debt.

Upon returning to office, Mahathir said, “We cannot afford to take on too much debt from China.”

However, although MRL and CCCC have agreed to form a 50:50 joint venture to manage, operate, and maintain the ECRL, Alicia Garcia-Herrero, chief APAC economist at the French banking group Natixis, told The Epoch Times this figure is likely to be a PR stunt to gain acceptance from Malaysians.

“China is realizing this is backfiring, so what do they need? Joint-ventures. They need people to think that the profits, revenues, jobs, are shared by the host country,” she explained.

Absolutely!. The whole Belt and Road mantra is changing towards a more accommodative one. Mahitir’s renegotiation of the East Rail project in Malaysia is the best example @eolander https://t.co/fALLpbGGgG

“China is very wary of single ventures, because they’re very criticized in their host countries. My impression is that it will never be 50:50—that China will control the project.”

Under the project’s new terms negotiated by Mahathir, the number of construction jobs for local workers is set to rise to 40 percent, up from the 30 percent agreed upon in the original contract, according to RFA.

Garcia-Herrero told The Epoch Times that other countries could now look at Malaysia and its “victory” to learn from Mahathir’s experience.

“The world is looking at Malaysia. Malaysia can stand out as a country that managed to renegotiate terms with China first under pre-conditions.

“The reduction in cost is quite substantial at 32%—this is massively positive news for Mahathir in terms of popularity and it opens the door to renegotiations elsewhere,” she said.

Ahead of Beijing’s second forum on the Belt and Road Initiative, rumoured to be scheduled for April 27 and 28, Garcia-Herrero believes that other heads of state will now come forward with new terms and proposals for their country’s deal, as China’s infrastructure project now has a weak image.

In an interview with Communist Party mouthpiece People’s Daily last month, China’s top diplomat Yang Jiechi said that around 40 foreign leaders have confirmed that they will be attending the event in Beijing.

“I think China has underestimated the ballooning effect of Mahathir’s victory. Malaysia is opening the doors for countries to be more pushy with China in their negotiations,” Garcia-Herrero added.

“It’s such a win-win, basically. The core is the image effect for Malaysia; as an independent country setting the stage.”

China’s Plan to Take Over Europe