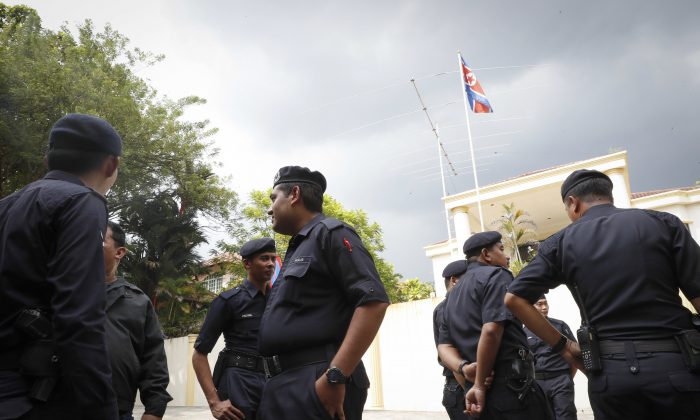 Malaysia Says Embassy Staff Should Assist If Nothing to Hide

KUALA LUMPUR, Malaysia—Malaysia’s police chief said Thursday investigators want to question a North Korean embassy official about the death of the exiled half brother of Pyongyang’s leader, saying he should cooperate if he has nothing to hide despite having diplomatic immunity.

Inspector-General of Police Khalid Abu Bakar said police have also asked Interpol to issue an alert for four North Korean men who left Malaysia the same day Kim Jong Nam was attacked by two women as he waited for a flight at the Kuala Lumpur airport on Feb 13.

The four men are believed to be back in North Korea, but police also want to question three other people still in Malaysia, including Hyon Kwang Song, a second secretary at the North Korean Embassy.

“The foreign officer has got immunity so we have to follow protocol,” Khalid told reporters. “If you have nothing to hide, you don’t have to be afraid. You should cooperate.”

Khalid acknowledged that Malaysia would not be able to question Hyon if the embassy exercises its immunity privileges.

North Korea’s official and highly selective state-controlled media mentioned the case for the first time, saying Malaysia’s investigation was full of “holes and contradictions” without acknowledging the victim was Kim Jong Nam.

The report from KCNA largely echoed past comments by North Korea’s ambassador to Malaysia, but the publication of at least some news inside North Korea could be a sign of its concern over growing international speculation that Pyongyang dispatched a hit squad to kill Kim Jong Nam.

According to the KCNA account, Malaysia initially said the man had a heart attack, but South Korea “kicked up a fuss” and plotted to have Pyongyang blamed for the killing. The report said “the biggest responsibility for his death rests with the government of Malaysia.”

Malaysia had said on Tuesday there was no evidence of a heart attack, but the autopsy results are not yet complete.

Police have said the two attackers rubbed a liquid on Kim Jong Nam’s face before walking away and quickly washing their hands. He sought help from airport staff but died before he reached the hospital.

The seeming contradiction of a poison that could kill him quickly but not sicken the attackers has stumped outside experts.

Bruce Goldberger, a leading toxicologist who heads the forensic medicine division at the University of Florida, said some protective measures must have been in place if the women handled the substance without gloves.

“It’s also possible that the toxin was encapsulated, then activated when applied to the skin,” he said. “As additional information is provided to the media by the police, it seems more likely that a new or modified chemical or biological agent was utilized in the attack.”

Long estranged from North Korea’s leadership, Kim Jong Nam had lived outside the country for years, staying in Macau, Singapore and Malaysia.

Alex Hwang, the owner of the Koryo-Won restaurant at a high-end mall in Kuala Lumpur, befriended Kim Jong Nam. He said Kim stayed in five-star hotels when he was in Malaysia and had dined in his restaurant since 2012 with a female companion, usually wearing a cap and casual clothing.

Kim never gave his name but Hwang, who is from Seoul and has family in North Korea, recognized him. He said he collected Kim’s dishes after a meal and sent it to the South Korean Embassy for fingerprint and DNA testing that confirmed his identity.

“He is a gentleman,” Hwang told the AP.

The two suspected attackers are in custody, as is a North Korean, Ri Jong Chol, 46, who police said works in the information technology department in Tombo Enterprise, a Malaysian drug company.

Tombo’s boss Chong Ah Kow told the AP on Thursday that Ri was not an employee of his company but that he applied a work permit for Ri to explore business opportunities in the import and export of palm oil and herbal extracts.

He said Ri first came to see him in 2013 in Kuala Lumpur and that he knew Ri’s uncle, a scientist in North Korea dealing with mushroom extracts. Ri also showed him a certificate of graduation in program engineering from the Kim Chaek University of Technology in Pyongyang, Chong said.

Chong said Ri was humble and soft-spoken and that he only met Ri a few times with Ri’s daughter, who acted as a translator. They last met in January this year for a possible palm oil venture but no deals have been struck. He said he was shocked to hear the news of his arrest. Ri’s wife and two children are in Malaysia, he added.