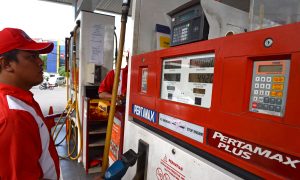 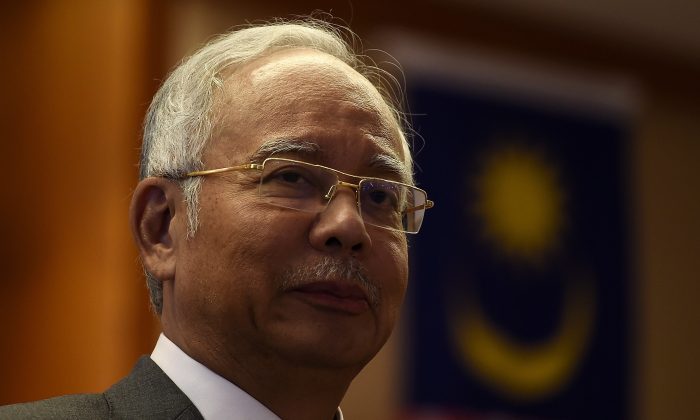 Malaysian Prime Minister Najib Razak during a meeting at his office in Putrajaya on July 8, 2015. (Manan Vatsyayana/AFP/Getty Images)
Opinion

A serious political crisis is playing out in Malaysia, with no certainty as to when, or whether, it will be resolved. At the heart of this crisis is Prime Minister Najib Razak, who recently shut down an investigation into his financial affairs by the Malaysian Anti-Corruption Commission (MACC).

The investigation had been triggered by allegations in the Wall Street Journal that 2.6 billion Malaysian ringgit ($700 million) had been transferred to Najib’s personal accounts from companies linked to 1Malaysia Development Berhad (1MDB). It is a state-owned strategic development company that is reportedly 42 billion ringgit ($11 billion) in debt.

Malaysian Prime Minister Najib Razak still hasn’t explained why $700 million were transferred to his accounts, while his crackdown on critics has narrowed the space available for political debate.

Najib has also dumped senior figures in government, including his deputy, Muhyiddin Yassin, and attorney general, Abdul Gani Patail. Senior opposition MPs were barred from traveling abroad, where they would certainly draw more attention to the scandal.

More recently, the police have raided MACC and arrested several of its officers. MACC’s senior staff have been left desperate for support, which came this week from opposition leaders who were once fierce critics of the commission.

Meanwhile, the funds in question are now said to have come from an anonymous donor in the Middle East. This explanation, however, still fails to account for why they were transferred to Najib’s accounts.

The currency has hit a 17-year low of 3.9 ringgit per dollar—due in part to the political instability. International investors have pulled 11.7 bilion ringgit ($3 billion) out of Malaysian shares, and the FTSE Bursa Malaysia KLCI Index has fallen by 3.8 percent.

Nevertheless, Najib has succeeded so far in protecting himself from critics both outside and within his ruling party, the United Malays National Organization (UMNO). UMNO has been the central party of government since Malaysia’s independence from Britain in 1957.

Revolt Looms From Within

Najib’s defensive crackdown has narrowed the space available for political debate, and UMNO is almost the only arena left open for his challengers to regroup. And regroup they very likely will—after all, 1MDB is not the only problem UMNO must confront. Before his dismissal, Muhyiddin had said that if an election were held tomorrow, UMNO would certainly lose.

Muhyiddin’s comment added insult to injury after UMNO’s ruling coalition lost its popular majority in the 2013 general election. Since then, UMNO has struggled to narrate its relevance in a positive manner to the Malaysian public. Instead, the government has appealed consistently to identity politics founded in race and religion. As part of that strategy, it imprisoned opposition leader Anwar Ibrahim in February, after he was found guilty of contentious sodomy charges.

Before Deputy Muhyiddin Yassin’s dismissal, he said that if an election were held tomorrow the ruling-party UMNO would certainly lose.

The government has also stoked opposition disunity by fostering disagreements over  hudud punishments. This caused the Pan-Malaysian Islamic Party (PAS) to abandon Anwar’s People’s Alliance coalition. Stronger forms of identity politics might be encouraged by competition between UMNO and PAS, which UMNO has sought to harness by proposing a “unity government.”

Yet now, thanks to 1MDB, it is not only the opposition that appears unstable. Rumors of a revolt within UMNO have begun to circulate, and Muhyiddin’s home state of Johor appears a likely base for such a revolt.

Further, in addition to this state-based unrest, former Prime Minister Mahathir Mohamad is a key Najib opponent inside UMNO. He has repeatedly called for Najib to step down. For Mahathir, Najib’s loss of public credibility is tantamount to an erosion of Malay Muslim sovereignty.

Now, as government and opposition forces scramble to resume competitive politics after the events of recent days, it seems this national crisis is still in full swing.

The Regional Dimensions of the Crisis

The divisions at home stand in stark contrast to Najib’s opening address to this week’s ASEAN (Association of Southeast Asian Nations) foreign ministers’ meeting, where he advocated a regional future forged through “preserving harmony.” Under Najib, the host nation has declared the building of a “people-centered ASEAN” as one of its primary goals.

As Najib pointed out, ASEAN nations face complex regional challenges that none can meet alone. As ASEAN establishes a single regional economy, the need for community-building efforts to underpin cooperation seems obvious.

Yet events in Malaysia are undermining its capacity to articulate a vision of a shared and prosperous future for Southeast Asians under its leadership. In light of the crisis engulfing Malaysia’s political class, it seems no one involved in formal politics is presently capable of promoting intercultural solidarity, social cohesion, and community resilience.

Since 2013, UMNO has devoted few resources to promoting Malaysia as a model for such a vision. Politically, it ceded that narrative to an opposition that surged electorally, but is at present in a state of open disarray.

For now, it seems that only NGOs can step into the space left open by the state of the political contest. Lately, the G-25 group of retired civic leaders and the Global Movement of Moderates (GMM) have publicly advocated improved community relations. Such interventions are patently necessary, as illustrated by a recent racial brawl in a Kuala Lumpur shopping mall, where blows were exchanged while a crowd chanted anti-Chinese slogans.

Australian institutions, too, have a role to play. They could engage groups like the G-25 and the GMM, and be ready to assist Malaysia and ASEAN to build a regional community defined by values like interculturality.

With Malaysian politics experiencing an extreme form of competitive restructuring, broader forms of engagement that include civil leaders are more essential than ever. After all, the next election is still three years away—assuming there is a next election.

Amrita Malhi is a postdoctoral research fellow at the International Center for Muslim and non-Muslim Understanding at the University of South Australia. This article was previously published on TheConversation.com