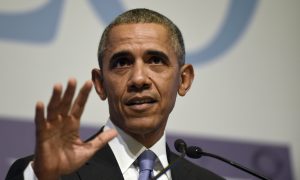 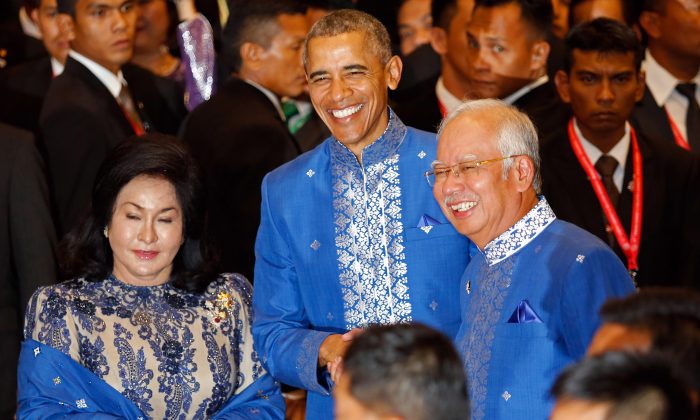 KUALA LUMPUR, Malaysia—President Barack Obama promised Saturday that Islamic extremists would find no safe haven anywhere, while the leader of Muslim-majority Malaysia branded the Islamic State (ISIS) as a “new evil” that has blasphemed the religion, and urged world leaders to confront it forcefully.

Obama and Malaysian Prime Minister Najib Razak were speaking separately at an Asian summit taking place against the backdrop of recent violence including the bombing of a Russian jet over Egypt, a suicide bombing in Beirut, a series of attacks in Paris, the slaying of a Malaysian hostage by militants in the Philippines and Friday’s attack on a Mali hotel.

Najib said he had planned to begin his speech by talking about the achievements of the 10-nation Association of Southeast Asian Nations, or ASEAN, of which he is the current chairman.

“But the events of recent days and weeks have cast a shadow over us all,” he said in remarks to open the ASEAN summit. “Be assured that we stand with you against this new evil that blasphemes against the name of Islam.”

“The perpetrators … do not represent any race, religion or creed. They are terrorists and should be confronted as such, with the full force of the law,” Najib said in a stirring speech that repeatedly emphasized the tolerance of Islam.

He also cautioned that a military solution alone will not be enough to defeat terrorism. “It is the ideology propagated by these extremists that is the cause of this sadistic violence. … We must not lose sight of the fact that the ideology itself must be exposed as the lie that it is—and vanquished. For it is not Islamic. It cannot be.”

Later, Obama spoke at a business conference on the sidelines of the summit, and referred to the Mali attack that left 20 people dead, including one American.

“With allies and partners, the United States will be relentless to those who target our citizens. We will continue to root out terrorist networks. We will not allow these killers to have a safe haven,” Obama said, adding that the world is determined “to push back on the hateful ideologies that fuel this terrorism.”

Obama and Najib will attend a larger summit of 18 Asia-Pacific countries on Sunday. Among them are Australia, Brunei, Japan, New Zealand, Singapore, Vietnam and Malaysia, which are all members of a new U.S.-led free trade agreement known as the Trans-Pacific Partnership that the Obama administration had pushed hard to achieve.

“This is a prime example of America and our partners working together to shape the world we want for future generations,” Obama said.

But, he said, TPP is more than a trade pact. It “is a long-term investment in our shared security and in universal human rights … when trade is done right it can help fuel progress in other areas,” he said.

After his speech, Obama visited a school where many of the children are Rohingya Muslim refugees from Myanmar. In an apparent rebuke to those who are against allowing Syrian refugees into the United States, Obama said that the Rohingya children “were indistinguishable from any child in America.”

“The notion that somehow we would be fearful of them—that our politics would somehow leave them to turn our sights away from their plight—is not representative of the best of who we are,” he said.

Malaysia is home to some 150,000 refugees from various countries. They include the Rohingya, who face discrimination from the Buddhist majority in their native Myanmar, where the government does not recognize them as citizens.

Still, the plight of the Rohingya will not be discussed during the ASEAN summit.

Instead, its centrepiece will be the formal establishment of the AESAN Community to create a unified economic entity on Sunday.

Envisaged in 2002, work on the community began in 2007, and it’s already delivering benefits to the region. Najib listed them in his speech:

Najib suggested that economic growth has been the bedrock of the region’s relative peace and progress. The combined GDP of the 10 nations—a motley conglomeration of 630 million people following Islam, Buddhism, Christianity, Hinduism, Sikhism, Confucianism and Taoism—was $2.6 trillion in 2014, an 80 percent increase in seven years.

Despite the good news that Najib delivered, the community falls short in more politically sensitive areas such as opening up agriculture, steel, auto production and other protected sectors. Intra-regional trade has remained at around 24 percent of ASEAN’s total global trade for the last decade, far lower than 60 percent in the European Union.

There are also other hurdles, such as corruption, uneven infrastructure and unequal costs of transportation and shipping. A wide economic gulf divides Southeast Asia’s rich and middle income economies—Malaysia, Indonesia, Singapore, Brunei, Thailand and the Philippines—and its four less developed members, Communist Vietnam and Laos, Myanmar and Cambodia.

The AEC was envisaged to face competition from China and India for market share and investments.

ASEAN’s relationship with China is highly complex and ambivalent. Despite being a competitor, China has also played the role of a principal financier in helping ASEAN reach its goals to temper its image as an economic threat.

At the same time, it has not hesitated to bully ASEAN countries in staking its claim to most of the South China Sea, where many ASEAN members have competing claims. China has also irked them by creating artificial islands from reefs to bolster its claim.