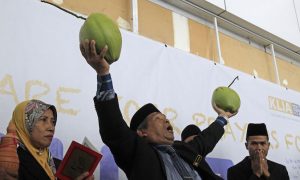 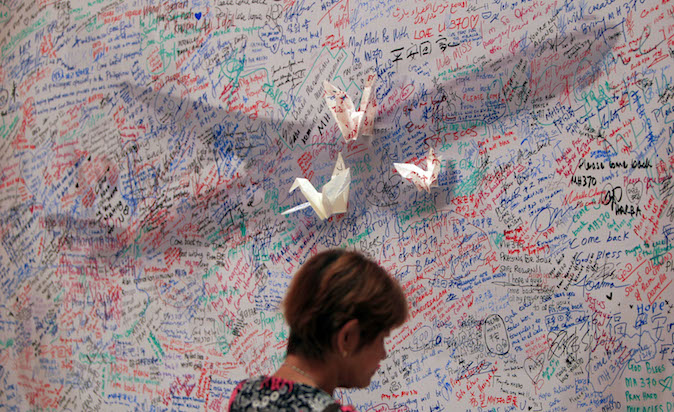 Here are the known facts so far for the Malaysia Airlines Flight MH370 disappearance. Check back for updates.

The Boeing 777-200 aircraft’s scheduled flight path would take it over stretches of the South China Sea and Vietnam on a journey of about 2,700 miles (4,350 kilometers).

According to a Malaysia Airlines statement, Subang Air Traffic Control lost contact with MH370 at 1:30 a.m. MYT (12:30 a.m. ET) over the sea between Malaysia and Vietnam.

On Mar. 11, the Malaysia military noted that the plane had inexplicably diverted hundreds of miles west from its original flight path.

On Mar. 15, Malaysia’s Prime Minister Najib Razak announced that MH370’s communications were deliberately disabled, suggesting evidence of foul play, and said that the focus of the investigation would be shifted to the crew and passengers.

PM Najib also said that due to tempering, the flight path of the plane could have deviated off-course from as far as the southern Indian Ocean or northwest to Kazakhstan.

There are 227 passengers from 14 different nationalities on the plane.

Five of the passengers are below the age of 5, including 2 infants.

There are 3 U.S. citizens on the flight.

Freescale Semiconductor, an Austin-based technology company, has 20 employees (12 from Malaysia, 8 from China) on MH370.

Four passengers with valid bookings for the flight never checked-in, according to a Malaysia Airlines statement on March 11.

On Mar. 12, Malaysia Airlines released a statement that a team of 112 caregivers have been deployed to Beijing to provide assistance to the family members of the passengers. The caregivers would provide emotional support and help the families meet their basic needs such as travel arrangements, accommodation, meals, and medical support.

Below is a list of the nations and number of passengers from them:

Both Europeans lost their passports in Thailand in 2013. Thailand is a known hub for counterfeit passports.

Interpol logged the passports as stolen in their database, but it was not checked prior to the flight.

The two Iranians, however, are not believed to have terrorist links.

There are 12 crew members on the plane. All of them are Malaysian.

Both pilots have been described as respectable, community-minded men.

Fariq and another pilot have drawn some flak for inviting two women aboard their aircraft to sit in the cockpit for a flight from Phuket, Thailand, to Kuala Lumpur.

The search and rescue (SAR) operations are headed by Malaysia, and aided by Australia, China, Thailand, Indonesia, Singapore, Vietnam, Philippines and the United States.

The United States has sent two navy ships, one equipped with helicopters, and a Navy P-3C Orion plane. A P-8A Poseidon, the most advanced long-range anti-submarine and anti-surface warfare aircraft in the world, will join the search on the weekend of Mar. 15-16.

SAR operations are being carried out in the South China Sea and on land along the plane’s scheduled flight path.

On Mar. 11, the scope of the search was extended to Malacca Strait between Malaysia’s western coast and Indonesia’s Sumatra island.

On Mar. 10, after analysis, it was proven that earlier discoveries of debris and an oil slick in the waters where the plane was supposed were not be from the plane.

On Mar. 12, India’s Ministry of External Affairs spokesman Syed Akbaruddin said that Malaysia authorities have contacted India to ask for assistance for the search. Also, Malaysia authorities acknowledged that they did not really know which direction the plane was headed when it disappeared.

On Mar. 15, Indian officials said they have no success in finding the missing plane.

Since no wreckage from the plane has been found, no cause has been established.

The Airbus A330 was flying from Rio de Janeiro to Paris when contact was suddenly lost mid-flight; 228 people were onboard.

Flight 447’s wreckage and most of the bodies were recovered after four searches over two years.

The cause of the accident was pilot error.

While rare, passenger planes have been known to mysteriously vanish without a trace, never to be recovered.

Malaysia Airlines believes the co-pilot aboard the missing plane spoke the last words to ground controllers.

Malaysia Airlines CEO Ahmad Jauhari Yahya said at a news conference that initial investigations indicate that co-pilot is the one who calmly said, “All right, good night.”

Officials previously have said that those words came at a point in the March 8 flight when one of the jetliner’s data communications systems already had been switched off.

The timing of the last words has sharpened suspicions that one or both of the pilots may have been involved in the plane’s disappearance.

Authorities now believe someone on board the Boeing 777 shut down part of the aircraft’s messaging system about the same time it disappeared from civilian radar. But an Inmarsat satellite was able to automatically connect with a portion of the messaging system that remained in operation by a “ping.”

No location information was exchanged, but the satellite continued to identify the plane once an hour for four to five hours after it disappeared from radar screens.

The satellite knows at what angle to tilt its antenna to be ready to receive a message from the plane should one be sent. Using that antenna angle, along with radar data, investigators have been able to draw two vast arcs, or “corridors” — a northern one from northern Thailand through to the border of the Central Asian countries Kazakhstan and Turkmenistan, and a southern one from Indonesia to the southern Indian Ocean.

The plane is believed to be somewhere along those arcs.

Now twenty-six countries are involved in the massive international search for the Malaysia Airlines jetliner. They include not just military assets on land, at sea and in the air, but also investigators and the specific support and assistance requested by Malaysia, such as radar and satellite information.

Timeline of Events Surrounding the Disappearance

— 1:07 a.m. ACARS transmits its regular, half-hourly data report about the jet’s engines and other data to the airline.

— 1:19 a.m. Someone, apparently the co-pilot, makes the final voice communication from the cockpit, saying “All right, good night” to air-traffic controllers.

— 1:20 a.m. The transponder shuts down, removing the plane’s identification on commercial radar systems.

— 2:14 a.m. The plane is last seen on military radar, heading west over the Strait of Malacca.

— 8:11 a.m. A satellite records a faint, final “ping” from the disabled ACARS system. A broad arc of the jet’s possible location stretches from Kazakhstan into the southern Indian Ocean.