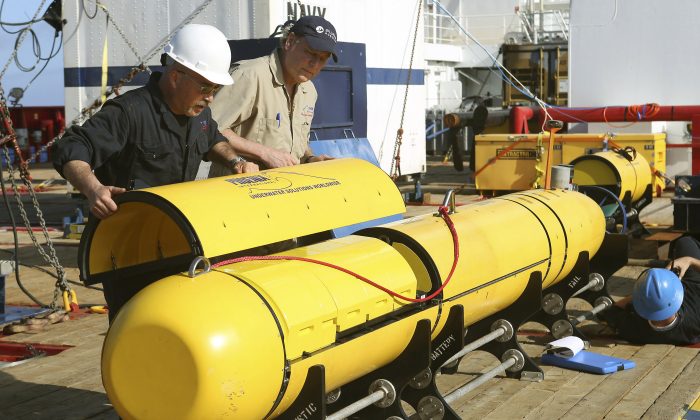 In this Monday, April 14, 2014, photo provided by the Australian Defense Force Phoenix International's Chris Minor, left, and Curt Newport inspect an autonomous underwater vehicle before it is deployed from ADV Ocean Shield in the search of the missing Malaysia Airlines Flight 370 in the southern Indian Ocean. The search area for the missing Malaysian jet has proved too deep for the robotic submarine which was hauled back to the surface of the Indian Ocean less than half way through its first seabed hunt for wreckage and the all-important black boxes, authorities said on Tuesday. (AP Photo/Australian Defense Force, Lt. Kelli Lunt) EDITORIAL USE ONLY
Asia & Pacific

A report is saying that missing Malaysia Airlines Flight MH 370 is located in Kandahar Province, and a terrorist called “Hitch” is behind the disappearance.

A Russian newspaper, Moskovsky Komsomolets, said the plane was hijacked and taken to Afghanistan and the passengers are now being held captive.

“Flight MH370 Malaysia Airlines missing on March 8 with 239 passengers was hijacked,” the Russian report says. “Pilots are not guilty; the plane was hijacked by unknown terrorists. We know that the name of the terrorist who gave instructions to pilots is ‘Hitch.’ The plane is in Afghanistan not far from Kandahar near the border with Pakistan.”

The report said that the passengers were divided into seven different groups and are living in huts with little food.

However, the Moskovsky Komsomolets report didn’t offer much in terms of sources–including names or even the identity of the intelligence agency it got its information from.

And Australian search teams are focusing on scouring the southern Indian Ocean for the plane and its black boxes. A submarine is now being used to look for the wreckage.

The alleged hijacking has not been confirmed by Malaysia. The Russian news report also said the terrorists are bargaining with Chinese and Malaysian officials, which also wasn’t confirmed by either country.

There were reports more than a month ago from The Independent newspaper–before Malaysian officials announced that the flew over the Indian Ocean and crashed–saying officials were exploring the possibility the plane may have been hijacked to Pakistan or Afghanistan.

The Independent said at the time: “The missing Malaysian airlines flight MH370 may have been deliberately flown under the radar to Taliban-controlled bases on the border of Afghanistan, it has emerged, as authorities said that the final message sent from the cockpit came after one of the jet’s communications systems had already been switched off.”

The Pakistani Taliban has previously denied hijacking the plane.

A robotic submarine looking for the lost Malaysian jet continued its second seabed search on Wednesday as up to 14 planes were to take to the skies for some of the final sweeps of the Indian Ocean for floating debris from the ill-fated airliner.

The U.S. Navy’s Bluefin 21 submarine began its second 20-hour underwater mission on Tuesday after cutting short its first because the ocean waters where it was sent were too deep, officials said.

The unmanned sub is programmed to hover 30 meters (100 feet) above the seabed, but it started searching atop a patch that was deeper than the sub’s maximum operating depth of 4,500 meters (15,000 feet), the search coordination center and the U.S. Navy said.

A built-in safety feature returned the Bluefin to the surface and it was not damaged, they said.

The data collected by the sub was later analyzed and no sign of the missing plane was found, the U.S. Navy said.

Crews shifted the search zone away from the deepest water before sending the Bluefin back for Tuesday’s mission, the U.S. Navy said.