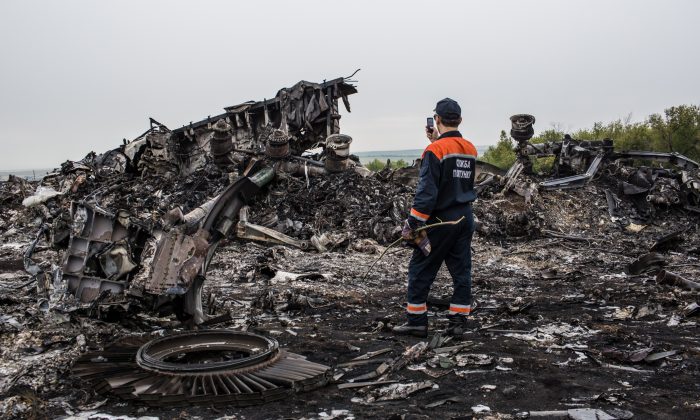 A scrap of metal found at the site came from a BUK missile, and it was picked up by a Dutch journalist visiting the village of Hrabove where the plane hit the ground. All 298 people on board the plane died when the plane crashed.

RTL News reported that pieces of shrapnel examined by forensic experts showed that it likely matched components from a BUK anti-aircraft missile system, according to News Ltd. and Reuters.

“Additional investigation material is welcome, but it is imperative that it can be indisputably shown that there is a relationship between the material and the downed aircraft,” the Dutch Safety Board told the broadcaster.

Russia has argued that the plane was shot down by Ukrainian government forces.

“Attempts at distorting facts, enforcing versions on what could have happened continue to exist, with some based on openly dirty intentions,” Lavrov said Thursday, reported state-run RT.com.

“[There are] some witnesses, who contradict one another, and express things amusing for any specialist. For instance, some wiggling rocket, separating rocket stages, blue clouds of smoke,” he added.

Last week, Reuters reported that villagers in Ukraine “saw a missile flying directly overhead just before a Malaysian airliner was shot out of the sky on July 17 last year, providing the most detailed accounts to date that suggest it was fired from territory held by pro-Russian rebels.”

The report added that “the accounts do not conclusively prove the missile launched [from there] was the one that brought down the airliner, because none of the villagers saw it actually being launched,” and it noted: “Nor could they shed light on a contention of officials in Kiev and in Western states, that the BUK missile battery was brought in from Russia and was operated by a Russian crew.”