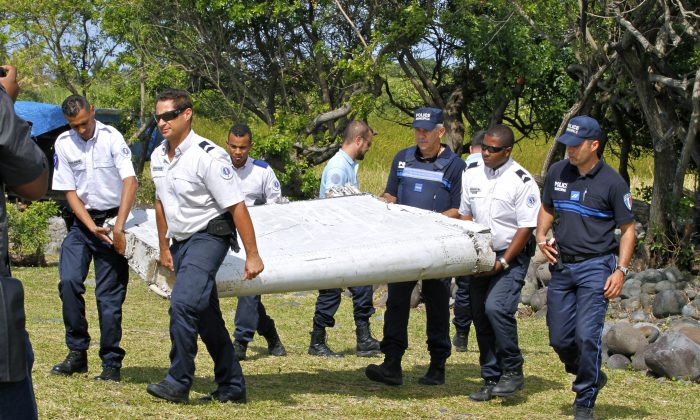 More suspected wreckage from Malaysia Airlines Flight MH370 has washed up on the northern shore of Indian Ocean island La Reunion, according to reports on Tuesday. But according to one Reunion police officer, “It might as well be from a sewing machine.”

Last week, a wing fragment, known as a flaperon, washed up in the same area. The fragment is from a Boeing 777, the same make as the Malaysian airliner that went missing in March 2014 with 239 people on board, according to the BBC. France has invited Malaysian and Australian aviation experts to Balma to take part in the investigation.

Local officials in Reunion have been sifting through reports of new debris found on Reunion, a French territory located off the east coast of Madagascar, as scavengers arrived on the beach looking for other plane parts, reported the Wall Street Journal.

A man, identified only as Bruno, apparently found a piece of plastic he believes came from a window frame on MH370. He found it while jogging on a path near the beach. The beach where he claims to have found the object is located a few hundred meters from the site where the wing fragment was found.

However, National Police Brigadier Gisele Cadar immediately cast doubt over whether the piece of plastic is connected to the missing plane.

“It might resemble the back of a plane window or rather the part where the masks fall but right now I can’t tell you anything,” Cadar said, according to the Stuff.co.nz news website. “It makes me smile a little because it might as well be from a sewing machine,” she told journalists.

A Radio Freedom reporter said Bruno was trying to sell mobile phone footage of the finding to CNN. Bruno then led three police officers and a dozen gathered journalists to the plastic item.

Cadar added, “The round bit makes me think of the back of a plane window or a sewing machine or the box in which they keep the safety items like the masks maybe.”

MH370 is believed to have crashed somewhere in the Southern Indian Ocean, approximately 1,000 miles from Perth, Australia. In France, there’s hopes that a lab analysis of the discovered plane part could deliver information on the plane’s final moments before it crashed.

“Basically it’s going to confirm the airplane is in the water and what attitude the airplane was at when it struck the water,” John Goglia, former member of the National Transportation Safety Board told Popular Mechanics of the process. “It does look like it was torn off in flight.”

Having been part of similar exercises, Goglia said the actual examination will involve a few different technologies.

“They will do a detailed inspection, with an X-ray and a scan of it,” he told the publication. “Above all, they need to identify the part and confirm it is from the 777.” Goglia added: “They’ll do everything humanly possible (to confirm it) before they would take it apart and possibly destroy the piece.”