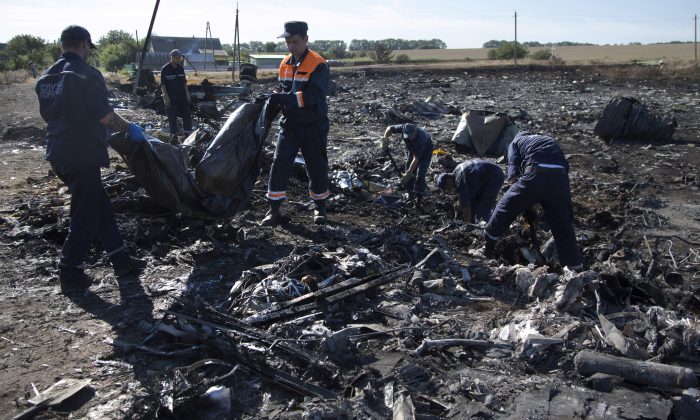 Ukrainian Emergency workers carry a victim's body in a plastic bag at the crash site of Malaysia Airlines Flight 17 near the village of Hrabove, Donetsk region, eastern Ukraine Monday, July 21, 2014. Another 21 bodies have been found in the sprawling fields of east Ukraine where Malaysia Airlines Flight 17 was downed last week, killing all 298 people aboard. (AP Photo/Dmitry Lovetsky)
Social Media

One purports to show the video of the crash, saying it has “[ACTUAL FOOTAGE] Missile Fired From Pro-Russian Militants to Malaysian Airliner MH-17.”

However, according to security blog Online Threat Alerts, that’s just another survey scam. There’s no actual video and when users click on the post and share it, they only get bogus surveys, which make money for the scammers behind the whole thing.

“This scam will trick you into ‘liking’, sharing or completing surveys, which it claims you have to do in order to watch the video. But, there is no such video, so do not be fooled into completing the surveys, liking or sharing it,” Online Threat Alerts says.

Another hoax–which may nor may not be a scam–features an actual video, but that wasn’t of Flight 17, which crashed in Ukraine.

According to hoax-debunking site Snopes.com, the video is of a cargo plane crash in Afghanistan.

The scams come as the Dutch have widely condemned the way the bodies of loved ones have been treated in Ukraine and the fact they have not yet been returned home, four days after Thursday’s tragedy.

In an unusual move that underscored the severity of the national trauma, a somber King Willem-Alexander gave a brief televised address to his country after meeting grieving relatives near the central city of Utrecht.

“This terrible disaster has left a deep wound in our society,” the king said. “The scar will be visible and tangible for years to come.”

Speaking after the same private meeting with hundreds of friends and relatives of the dead, Prime Minister Mark Rutte acknowledged the nation’s discontent.

“No words can describe it,” said Silene Fredriksz-Hoogzand, whose son Bryce and his girlfriend Daisy Oehlers died on their way to a vacation in Bali. “Bodies are just lying there for three days in the hot sun. There are people who have this on their conscience. There are families who can never hold the body of a child or a mother.”