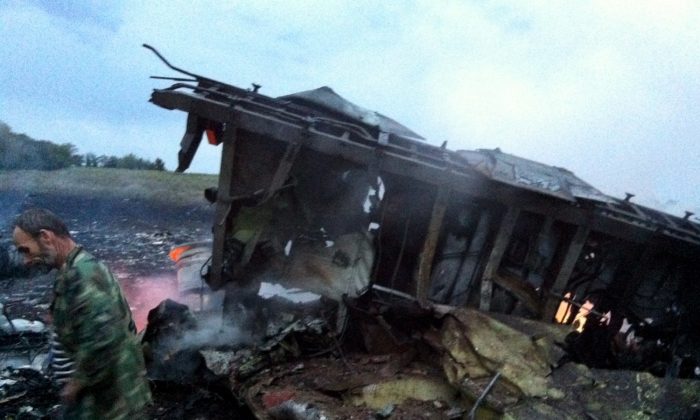 A man stands next to the wreckage of the malaysian airliner carrying 295 people from Amsterdam to Kuala Lumpur after it crashed, in rebel-held east Ukraine, on July 17, 2014. Pro-Russian rebels fighting central Kiev authorities claimed on Thursday that the Malaysian airline that crashed in Ukraine had been shot down by a Ukrainian jet. (Dominique Faget/AFP/Getty Images)
Europe

Malaysia Airlines: Americans on Board Flight 17?

WILMINGTON, Del. (AP) — President Barack Obama said Thursday that the passenger plane downed over Ukraine “looks like it may be a terrible tragedy” and his top priority is finding out whether American citizens were on board.

Obama said he’s directed his aides to stay in close contact with Ukrainian officials and offer U.S. help to determine what caused the crash. Ukrainian President Petro Poroshenko called the downing of the Malaysia Airlines plane carrying 295 people an act of terrorism.

An Associated Press journalist counted at least 22 bodies at the crash site about 25 miles from the Russian border, where government and pro-Moscow separatists have been fighting.

Obama press secretary Josh Earnest said Obama was on a phone call with Russian President Vladimir Putin when news of the downed plane broke. Earnest and the Kremlin said Putin mentioned those early reports in the call, but provided no details of what the two leaders said about it.

“The world is watching reports of a downed passenger jet near the Russia-Ukraine border,” Obama said later as he took the stage for a speech in Delaware to discuss transportation funding. “It looks like it might be a terrible tragedy. Right now we’re working to determine whether there were American citizens on board. That is our first priority.”

The rest of the phone call between Obama and Putin was dedicated to the general situation in eastern Ukraine, and recent U.S. sanctions against Russian individuals and companies.

The Federal Aviation Administration had warned U.S. pilots earlier this year not to fly over portions of the Ukraine in the Crimea region, according to notices posted on the agency’s website.

The FAA had not issued any new warnings Thursday afternoon in the immediate aftermath of reports that a Malaysian airliner had been shot down over the Ukraine.