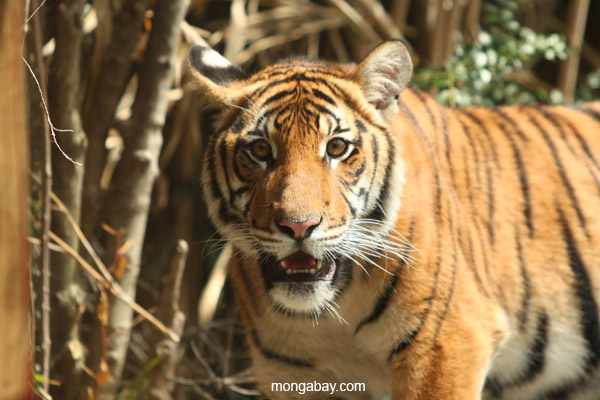 Malaysia is on the edge of losing its tigers, and the world is one step nearer to losing another tiger subspecies: the Malayan tiger (Panthera tigris jacksoni). Camera trap surveys from 2010-2013 have estimated that only 250-340 Malayan tigers remain, potentially a halving of the previous estimate of 500 individuals.

In 2008, Malaysia committed to doubling its tiger population to 1,000 animals by 2020. But a statement from the Department of Wildlife and National Parks (PERHILITAN) and the Malaysian Conservation Alliance for Tiger (MYCAT) admits that may now be impossible.

“With the new estimate in 2014, that target may now be unachievable in this timeframe,” the groups.

Wildlife biologists surveyed tiger populations across seven sites in three known tiger habitats in the country using camera traps, but came up with far fewer tigers than hoped for. Still, more surveys in other sites are needed to come up with a harder number.

Currently, the Malayan tiger subspecies—which was first formally recognized in 2004 after genetic tests—is listed as Endangered by the IUCN Red List. But PERHILITAN and MYCAT believes the status may have to be changed to Critically Endangered given the recent estimates.

According to the groups, the Malayan tiger is most threatened by the illegal wildlife trade. Tiger parts are in high demand in many parts of Asia for traditional medicine and poaching has decimated the species for centuries across its wide range.

But the Malayan tiger is also threatened by the “loss and fragmentation of forests,” according to the groups. Indeed, Malaysia has the highest rate of forest loss in the world from 2000-2012, according to Global Forest Change. During those 12 years, the country lost 14.4 percent of its forest cover from a 2000 bench-line. In all the country lost an area of forest larger than Denmark during that time: 47,278 square kilometers (18,244 square miles). Malaysia is one of the world’s biggest supplier of palm oil, which has been blamed for replacing rainforests with monoculture plantations for decades.

Another threat facing Malayan tigers, according to a study by MYCAT last year, is a decline in tiger prey, pointing especially to a loss of sambar deer to hunting and snares.

Tiger range states have pledged to double global tiger populations by 2022—the next Year of the Tiger—to at least 6,000 animals. But despite this unprecedented international agreement, ambitious pledges, and millions in funding, tigers continue to struggle to maintain present populations, let alone bounce back worldwide. Today, there are thought to be around 3,000-4,000 tigers in the wild, less than the number held in captivity in the U.S. Around half of those tigers are found in India.