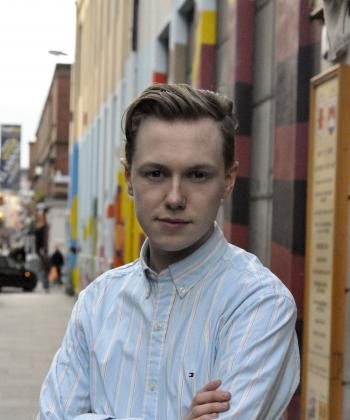 In case you have not noticed, there are lot of election posters in the capital which do not contain the usual political rhetoric, and Mr O'Brien and UpStart are to be thanked for adding some much-needed colour to the 2011 general election.

The reason behind the initiative, he says, is that “it seemed like such a cool idea and also because you can do it … we did it for creativity and to promote creativity."

Commenting on election campaigns in general, Mr O'Brien says they are “always such an eyesore … especially now, people just don't like the mug shots of politicians, in their face for three weeks.”

According to Mr O'Brien, one can put up a poster as long as it is related to the general election. Therefore, he and his colleagues put up their own posters with themes that aim to promote creativity for the February 2011 election.

"Promising creativity in the 2011 election is written at the bottom of every poster – and the Upstart logo," he said.

"It was pretty simple, we can do this, anybody can poster during this three weeks, the lampposts are open for business, so we decided to do it."

Mr O'Brien said no special permission was required, "as long as you stay within the guidelines."

He emphasised that UpStarts manifesto has a lot of references to what they are trying to achieve in relation to bringing art and creativity into the publics' and the electorates' mindset.

"We are trying to put something into the minds of people about the country; you couldn't just put a product up there … that would be considered litter then."

The idea itself is an "evolution of ideas," said Mr O’Brien, because a friend, Aaron Copeland, first suggested it to him when he saw it during the Lisbon treaty.