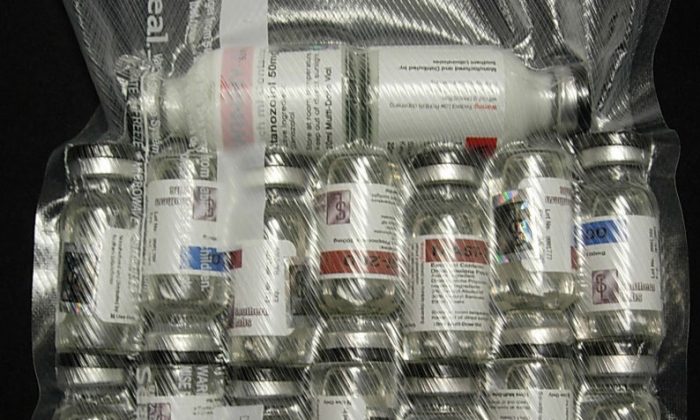 This image is an image taken during the September 2007 Anabolic Steroid "Operation raw deal" bust. The image is public domain because it was taken by the Drug Enforcement Administration. This is an image of capsules of various anabolic steroids.
News

Making Sense of the Designer Anabolic Steroid Control Act of 2014

Popular spectator sports have many rules. Some of these rules are completely geared to what happens between the lines. If you’re a player in the National Football league, for instance, one rule or another in the NFL rule book covers everything you do and say. Players are routinely penalized and fined for transgressions as obscure as wearing the wrong kind of socks, or showboating after a score.

There are so many rules for players in professional sports leagues like the NFL because there’s a lot of money and prestige involved, and it’s human nature to try to gain any advantage you can over your opponent. When an NFL official pulls out the yellow penalty flag and throws it to indicate he’s observed a penalty, commentators often point out that if the referees and judges looked hard enough, they could find someone committing a penalty on every play, and usually multiple players committing infractions that aren’t called. More or less, everyone does everything they can to get away with it in order to win.

The use of performance-enhancing drugs like anabolic steroids and human growth hormones are just as strictly regulated by professional sports leagues as any other behavior. Hardly a day goes by without a report that a well-known player has tested positive for one banned substance or another and will be required to serve a suspension because of it.

So many players test positive for these banned substances that a casual observer might infer that the use of performance enhancing drugs is nearly universal in professional sports leagues. If that’s true, it follows that the leagues that feed the professional ranks would also have many players that use performance enhancing drugs like anabolic steroids and human growth hormone (HGH) as well.

A United States District Court judge recently ruled that the National Collegiate Athletic Association violated antitrust law by banning the ability of student athletes to make money from the use of their likenesses in advertising for commercial products. The fact that college players stand to make substantial wealth from endorsement deals simply because they might become professionals in the future points to the enormous amount of money at stake, and hints at the kind of pressure there is at every level to win at any cost.

For many players, taking banned substances like anabolic steroids and closely related compounds is a quick means to a lucrative end. As the lure of big paydays continues to be felt ever lower down the athletic food chain, high school players are also turning to these performance-enhancing compounds to try to make their way to the big time.

Anabolic steroids are chemical derivatives of the hormone testosterone. Testosterone is a naturally occurring substance in the human body, and it’s the one most responsible for building muscle mass. It has many other effects in the body, including increased aggressiveness and energy. The reason athletes of both sexes take testosterone to augment the amount of the hormone in their body is because it works. Taking anabolic steroids lets you train harder, build muscle faster, strengthen bones, and become generally more competitive in both energy and mood. Unlike many substances that athletes try to gain an edge, steroids do the job.

But at what cost? According to Steroidal.com, there is a long list of undesirable physiological and behavioral effects that athletes suffer when they raise the level of these hormones in the body too high. Some athletes have been known to take so many of these substances that their levels of testosterone are between 10 and 100 times higher than normal.

Women have a much lower amount of naturally-occurring testosterone, of course, so it’s easy for them to reach levels in the bloodstream that are 1,000 times the normal amount. Hormones are beneficial and necessary to normal human functioning, but extremely high levels associated with abuse can lead to toxic levels in the bloodstream, leading to renal problems, heart problems, and behavioral problems like depression and heightened anxiety. The use of these drugs and their side effects are not a trivial matter. According to an Aljazeera America report it’s estimated that over 10 million Americans are currently taking anabolic steroids.

Athletes are looking for any edge they can find without running afoul of drug tests. College and high school athletes that hope to follow in their footsteps to the pros have also turned to supplements. Supplements come in so many forms that they would be impossible to list. They’re generally touted as a form of superfood potions that aren’t exactly drugs, but not exactly part of a regular diet either.

As the prohibitions against anabolic steroids and other hormone replacement drugs have grown, an entire generation of supplements has risen to take their place offering athletes at every level an alternative to these dangerous drugs. These supplements were generally sold as health and nutritious products not drugs.

The problem with this perception is that many supplements were drugs, or to say the least contained traces of the banned substances that had led to their being so popular. Within the last decade, up to fifteen percent of supplements labeled natural contained a measurable amount of anabolic steroids. Because the health and nutrition industry receives less oversight than the drug industry, claims of the safety and effectiveness of the supplements didn’t receive the same scrutiny as they might have. Now all of that is changing.

The United States (U.S) Congress is currently considering a bill called the Designer Anabolic Steroid Control Act 2014. The legislation would ban about two-dozen new substances, and make it a serious crime to falsely label any product that contains anabolic steroids. This word designer in the title refers to the practice of devising compounds that are in essence anabolic steroids but that have slightly different chemical properties that currently would make them exempt from bans on selling anabolic steroids to the public. The bill names about two dozen existing compounds as subject to the ban, but would also ban any produced in the future that are made with the same process.

The Designer Anabolic Steroid Control Act 2014 isn’t yet enacted into law, so these substances are still legal to buy. The act further specifies that supplement manufacturers would still be allowed to produce any kind of compound that relies solely on extracts from herbs or botanicals, so it’s not any kind of outright ban on performance-enhancing supplement production, sale, and use. The act simply seeks to remove true anabolic steroids from the supplement shelves and return them to the pharmacy shelf where they belong.