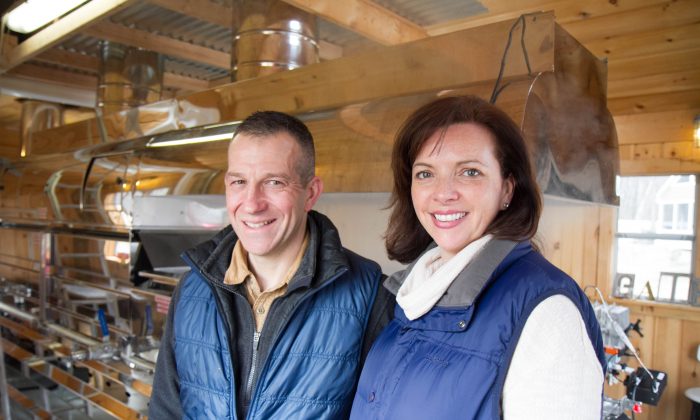 GREENVILLE—There are not many farms that can say their high season is in February, but Finding Home Farms in Greenville is at its busiest production point right now, making maple syrup.

“We always say the best part is when sugaring starts and when sugaring ends,” said Dana Putnam, a co-owner of the farm and a fourth-generation maple syrup farmer.

On a Sunday afternoon in February, billows of mapley steam can be seen coming from their sugarhouse, a shed-like building right next to their home in a 13-house neighborhood on their short, .3-mile long road.

Their farm doesn’t start or end there though.

Some five miles away, they have about 50 acres of rented land where they tap almost 4,000 sugar maples.

The land is almost all mature sugar maples that grow on a steep incline, which helps the sap flow down to the two tank houses at the bottom of the hill. Dana said he has never seen a more perfect layout for sugar farming.

The woods look like a giant spider web of blue tubes that connect the trees in a waist to head-high network.

Around February, Dana and his family tap the trees with little plastic taps that connect to the roughly 15-mile network of hose.

The woods look like a giant spider web of blue tubes.

“Basically, you tap not too close to where you tapped it last year, so you continuously move it around the tree,” Dana said, showing a former tap hole that was healing over.

Usually they start tapping in February and the season runs till mid March because the flow of the sap requires the freeze thaw cycle. Because of the warm winter, they started producing in January this year.

During the cold season the tree is bringing all the nutrients it stored in its roots during the summer to its branches in preparation for spring. This creates a negative pressure that makes the sap flow out when tapped.

Just to help it along, Dana uses a vacuum pump located in one of the tank houses that increases the positive pressure on the outside.

It is then funneled through the tubes into the two tank houses, where it goes through its first round of reverse osmosis.

“We just get rid of some of the water, maybe from … 1.5 percent to 3 percent [sugar], and it doesn’t sound like a lot, but you’re literally getting rid of half of the volume,” Dana said.

The final product is over 60 percent sugar.

The final product is over 60 percent sugar. The water that is removed goes to cleaning the equipment at the end of the day.

After the first round of reverse osmosis, the now slightly-sweet sap is held in another steel tank until Dana or the Putnam’s hired help come to take it away.

In the back of the sugarhouse are several 785 gallon stainless steel holding tanks where the sap is stored before it goes through its second round of reverse osmosis.

“It [the reverse osmosis machine] has a membrane that it pumps the sap through under pressure and the pores are too big for the sugar to go through, but the water can,” Dana explained.

Reverse osmosis is one of the few modern additions to the syrup-making process, Dana said, and has not only sped it up, but has cut down on the energy cost because it takes out a lot of the water that would otherwise have to be boiled off.

It [the reverse osmosis machine] has a membrane that it pumps the sap through under pressure and the pores are too big for the sugar to go through, but the water can.
— Dana Putnam, Maple Farmer, Finding Home Farms

“It’s the way to go as far as making syrup as green as you can,” Dana said.

Other than that, the process of making maple syrup has stayed the same for years— Dana’s grandfather, who recently passed away at 100 and made syrup till he was 88, used similar equipment to what Dana is using today, he said.

After reverse osmosis, the sap goes through a tube into the evaporator in the sugarhouse. The steam from the evaporator is used to pre-heat the sap as it comes in through overhead pipes.

Within an hour, the evaporator, which puts the syrup through a maze of stainless steel heated pans, can turn about 150 gallons of slightly sweet sap into 20 gallons of maple syrup.

Within an hour, the evaporator can turn about 150 gallons of slightly sweet sap into 20 gallons of maple syrup.

It then goes through a filter press with paper sheets to remove any particles that may have gotten in.

Once it comes out it is ready for bottling, packing, and shipping to their 30 plus vendors around the country, the majority of which are in New York and New Jersey.

Making a living making maple syrup was not what the Putnams saw themselves doing until a few years ago.

Dana grew up on a dairy farm in New Hampshire that also made maple syrup, and was doing it as a hobby while working for Balchem Corporation, a specialty chemical company based in New Hampton.

Making a living making maple syrup was not what the Putnams saw themselves doing until a few years ago.

Without knowing what he was going to do, he handed in his resignation. After a few months of contemplation, he decided to build a sugarhouse.

“It just became an evolution. I wouldn’t say it was so much of a ‘Well, we’re going to do this.’ What made sense just sort of evolved,” said his wife Laura.

They decided to combine the maple syrup business with Laura’s home decor business, Finding Home, which specializes in American-made home decorating goods, and turned it into Finding Home Farms.

Next year, they are planning to significantly expand.

And next year, they are planning to significantly expand on that.

They bought 55 acres about a mile and a half from their house and Dana said in a couple of years, it should increase their tree count from just under 4,000 to 6,000 or 7,000 when the tress are mature.

Their plan is to build a bigger sugarhouse, both to increase their capacity, but also to have a place where the public can come and learn about syrup making.

Laura dreams of it being a place where they can hold classes, sell other local products, and maybe one day be a farmers market.

We really just want to create a viable business that is part of our community.
— Laura Putnam, Co-owner, Finding Home Farms

Like their sugarhouse, they hope their business grows just big enough that they can sustain themselves and provide an asset to the community through increased employees, but not so big that it loses its homemade feel.

“We really just want to create a viable business that is part of our community, and doing something that we love and creating something for our family,” Laura said.