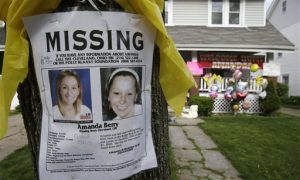 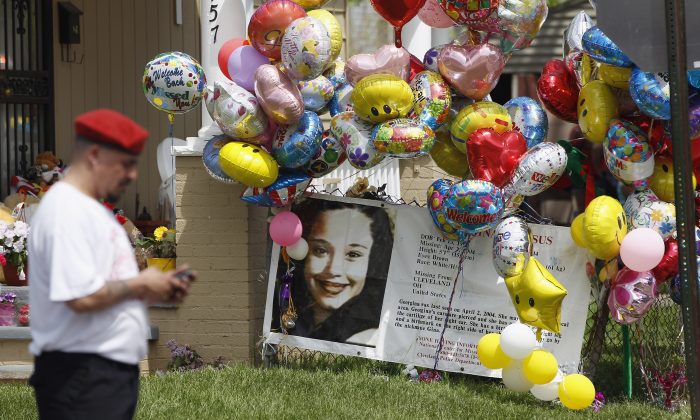 A Guardian Angel waits for the car carrying kidnap victim Gina DeJesus to arrive at her house on May 8, 2013, in Cleveland, Ohio. DeJesus was one of three women who were held captive for almost a decade in a home in Cleveland. (Matt Sullivan/Getty Images)
US

Life After Captivity: What’s Ahead for Ohio Women

Held captive inside a rundown Cleveland home and subjected to untold abuse for 8 to 10 years, Amanda Berry, with her 6-year-old daughter, Gina DeJesus, and Michelle Knight, now free, each have their own journey ahead of them as they recover.

“We don’t really know what they suffered,” said Carolyn Ievers-Landis. “But we can imagine that they were not treated very well in addition to being deprived of their freedom. [It’s] pretty major psychological trauma that they’ve had to endure.”

Dr. Ievers-Landis is a licensed clinical psychologist and an associate professor of pediatrics at University Hospitals Rainbow Babies & Children’s Hospital in Cleveland.

Cleveland Police Deputy Chief Ed Tomba would not disclose details of what the women suffered while in captivity, or what Berry’s daughter may have endured. At a televised press conference on May 8, Tomba said they had enough evidence to charge Ariel Castro with four counts of kidnapping and three counts of rape. The women may have only been outside the house twice in 8 to 10 years.

Recovery for the three survivors is going to be a process. Resiliency to come through enormous suffering can vary from person to person, according to Ievers-Landis.

Berry’s daughter will need to be introduced to childhood. “We are not sure whether or not she was allowed outside of the home, or what she witnessed in terms of the treatment of these women,” she said.

“She really hasn’t had the chance or opportunity to experience things such as sharing, taking turns, or socially interacting with other children—she hasn’t had those opportunities,” Ievers-Landis said, adding that psychological intervention can help her recover.

A person’s personal makeup, stability of mental health before traumatic events, and the strength of his or her ability to endure, can contribute to resiliency.

Ievers-Landis is hopeful for these women. “And [they] should be able to recover and move on to very happy and productive lives,” she said, adding that appropriate treatment will foster recovery.

But one of her concerns is that their lives will not return to normal because now they are famous.

“This was forced upon them,” she said. “I am very hopeful … they can go places and do normal activities, because if they are still under scrutiny or under the public eye then they are still in some sort of captivity; it’s a different type,” according to Ievers-Landis.

One young woman, Jaycee Dugard, who was kidnapped at 11 years old in 1991 and held captive for 18 years, was cast in the media spotlight once she escaped. She wrote a book called “A Stolen Life: A Memoir.”

Ievers-Landis read the book and found it disturbing to read, but also very inspiring how Dugard came out of the trauma.

“What gratitude she feels for even the little aspects of living a normal life and of freedom; I think that is very inspiring that these young women can also go on and live very joy-filled lives from here on in,” Ievers-Landis said.

A lot has changed since the kidnappings. Berry’s mother died in 2006. Knight’s mother had not heard her daughter’s voice since her rescue, as of noon May 8. She said Knight was still in the hospital.

“I haven’t seen her in so long and I can’t wait to see her. She was my daughter and my best friend,” Knight’s mother said in a televised interview with WKYC.

Berry and DeJesus were both welcomed home with balloons, cheers, reporters, cameras, and police motorcycle escorts.

Dr. Geoffrey Greif, a professor at the University of Maryland School of Social Work, said in a interview that there will be variations between families.

“I think that the important thing to remember is that these women and their families were different prior to the abduction and they are obviously different now. So their trajectories will not be the same,” Greif said.

The initial desire is for things to go back to the way they were, but that’s not entirely possible, according to Greif.

“The notion here is to try for something that is a normal relationship with the usual ups and downs that all family relationships have,” he said.

One of the books Greif co-authored is called “Family Reunification After a Lengthy Abduction,” published by the National Center for Missing & Exploited Children. He said that the women should be allowed to recover at their own pace and in their own way.

According to Tomba, victims of rape and abuse share their experiences with others in their own time, adding that sometimes they decide to talk more about their experience years after the trauma.

Greif recommends for relatives to just make themselves available to hear whatever the person may want to say and be accepting of what the abducted, now recovered, person has to say.

“That may be very hard because there can be some very unpleasant things. … It’s to give the person space, to give the person time, and to communicate that you are there for them and willing to hear whatever is that they have to share,” he said.

RELATED: What the Neighbors Saw in Cleveland Kidnapping Case