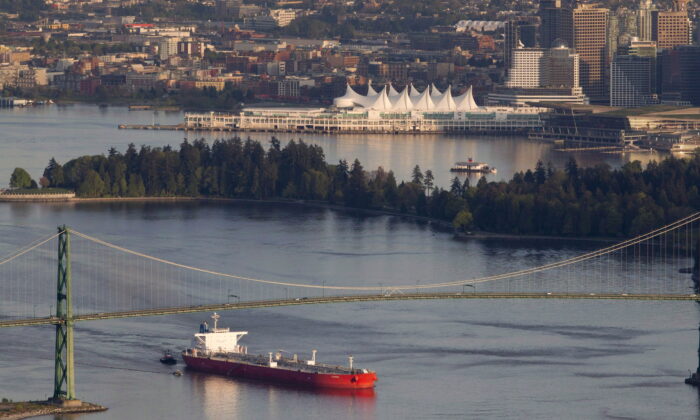 An oil tanker goes under the Lions Gate Bridge as it enters Vancouver Harbour in a file photo. (The Canadian Press/Jonathan Hayward)
Canada

Energy analysts and business leaders have been warning North Americans and Europeans about declining energy security for years. Western nations have spent the last decade obsessed with developing renewable energy resources while shutting down their own conventional energy resource development under the assumption that a great transition would happen.

Canada shut down the Northern Gateway pipeline to the west coast and instituted a tanker ban. The Energy East pipeline was regulated to death while Quebec banned all oil and gas activity in their province. The Trans Mountain pipeline expansion project was brought to death’s doorstep through government regulations—bought by the government as private investors fled—and has since languished in a partially constructed limbo.

While many liquid natural gas terminals have been pitched in Canada, all but one has given up hope and the remaining one is hopelessly delayed in its construction.

The Americans were no better, as President Biden cancelled the Keystone XL pipeline while governors such as Gretchen Whitmer of Michigan have lobbied tirelessly to shut down Canada’s Line 5.

Coal generation has been shut down throughout the Western world though many countries were dependent upon it.

Investment in new conventional energy projects and infrastructure has come to a near halt. Nations are known for shutting down projects mid-construction while the approval process for new projects is nearly impossible to acquire.

Blinded by ideology and misplaced optimism, nations increased their imports of foreign petrochemical products rather than developing their own. They became dependent upon unethical but inexpensive exporters of energy such as Saudia Arabia, Venezuela, and of course, Russia. They still viewed fossil fuels as a stopgap and were confident that they would become energy independent with renewable sources before they would ever need to develop their local sources of fossil fuels again.

As an energy crisis began to take shape in Europe last fall, many people, including myself, were raising the alarm about energy insecurity. We were often dismissed as being alarmist and were ignored.

Due to the Russian invasion of Ukraine, the world has gotten the energy reality check we had been warning would come. It wasn’t just Russia’s military ability that emboldened Putin to invade Ukraine. He felt confident that economic repercussions would be limited since much of Europe was dependent on Russian oil and gas. However, Putin underestimated international opposition as countries are now shunning Russian petrochemical products.

This has led to a dramatic rise in energy costs around the world. Countries just beginning to emerge from the economic pressures of the pandemic now may face recessions due to energy prices.

It is nice to be able to say I told you so but it is of cold comfort. People are suffering from this energy crisis.

The question now is whether or not nations are learning from this crisis. Do Western leaders understand the importance of having a strong, dependable domestic energy supply yet?

I fear they don’t.

Most of the Keystone XL pipeline has been constructed. It wouldn’t take much to revitalize that project and increase North American capacity by over 800,000 barrels per day. Despite this, President Biden refuses to even entertain the notion of bringing that pipeline back to life. He would rather go on bended knee to Venezuela and Saudi Arabia to beg for increased production.

Canada’s Energy East line only needs to be constructed past Ontario. With strong government support, that line could be operational in relatively short order and Eastern Canada would no longer need to bring in oil through Saudi and Nigerian tankers. Trudeau won’t consider that though, nor will he expedite the construction on the Trans Mountain expansion.

The Russia-Ukraine war will likely be resolved before any new pipelines are completed. That doesn’t mean we won’t face new energy challenges down the road.

We need to face reality and become energy independent. North America has some of the largest petrochemical deposits on earth. It is ludicrous that we have made ourselves dependent upon foreign supplies of energy as we have.

The great green transition from petrochemicals is still many decades away. We can still strive for new sources, but we have to stop cutting off our current sources in anticipation. We just aren’t ready to leave fossil fuels behind.

If we don’t fully develop our local sources of fossil fuels soon, mark my words we will see another crisis within a few years.

Let’s learn from our mistakes. Don’t make me say I told you so again.