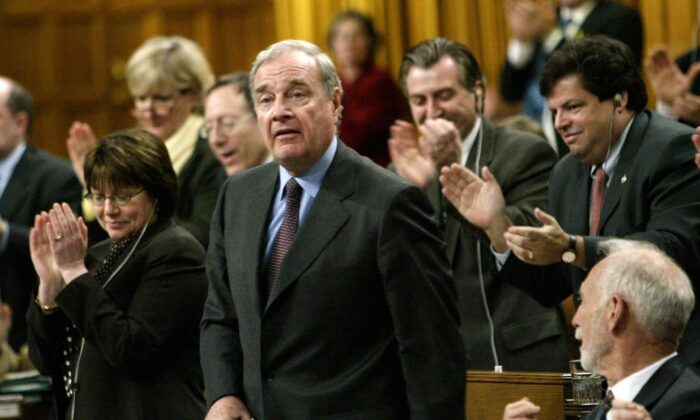 Prime Minister Paul Martin receives a standing ovation after responding to questions concerning the sponsorship scandal in the House of Commons on April 20, 2004. The scandal became a significant factor in the defeat of the Liberals in the 2006 federal election after more than 12 years in power. (CP Photo/Tom Hanson)
Canada

What Determines Whether a Political Scandal Will Stick

Although polls show some decrease in support for the Liberals due to revelations they handed a large contract to a charity with ties to the prime minister’s family sans a bidding process, few people are ready to drop their support for the party.

Political experts say that could change, however, since the timing, context, and content of scandals determine whether they will impact voters—particularly if a police investigation is launched.

A poll released July 20 by Abacus Data found that if an election were held today, the Liberals would have the support of 36 percent of Canadians. This was a four-point percentage drop from an Abacus poll at the end of June, but still left the Liberals five points ahead of the Conservatives.

Nelson Wiseman, professor emeritus at the University of Toronto, says he expected the WE Charity scandal would have limited impact because it is less serious than the SNC-Lavalin affair.

“I thought, ‘Yeah, that makes perfect sense because most people aren’t thinking about that.’ And also it’s a different type of scandal because here you’re dealing with a charity. And with SNC-Lavalin you were dealing with bribery and foreign operatives and a long history and interference within the cabinet.”

Wiseman says the political impact of a scandal depends on its timing, content, and context, and in the present scandal the context is the pandemic.

“The pandemic is consuming if not all, most of the oxygen in the media world and in the real world. So in that context, anything else that happens is for most people quite secondary.”

When it comes to scandals, he says, “timing is absolutely critical” because “the public has a short attention span,” but that timing alone can’t guarantee an electoral impact. The release of blackface photos of Justin Trudeau a month prior to the federal election provides a recent example.

“Most people just shrugged about this, [despite] all these editorials … [saying] how this is racist, this is totally unacceptable. And then it came out that all kinds of people had been involved in blackface and a lot of people just didn’t see it as racist, including blacks,” he says.

From 1996 to 2004, a previous Liberal government bought ads to publicize federal support for Quebec industries and thereby undermine support for Quebec separation. Some Liberal-linked ad firms did little or no work but had Liberal organizers or fundraisers on the payrolls, or donated funds back to the Liberal Party.

Early in 2004, Auditor General Sheila Fraser wrote, “I think this is such a blatant misuse of public funds that it is shocking. I am actually appalled by what we’ve found.”

In June of 2004, the “AdScam” sponsorship scandal reduced Paul Martin’s Liberal government to minority status. Yet when he called an election a year-and-a-half later, the Liberals seemed ready to regain a majority.

Wiseman says the turning point came shortly before Christmas, when the commissioner of the RCMP announced they were investigating the finance minister and his office, prompted by a letter from the NDP’s finance critic.

“Once the RCMP comes out and says they’re investigating the public figures—‘hey, there’s smoke, there must be fire. This fits the whole Conservative narrative that the government is corrupt!’”

Wiseman expects the WE scandal will be largely forgotten by the next election unless criminality comes to light.

“The question is, what’s the criminal element?” he says. “The police are there for the criminal code. The Conservatives are calling for the police to launch an investigation but that’s purely partisan showmanship.”

Duff Conacher of Democracy Watch has also written the RCMP commissioner to request an investigation. A Supreme Court of Canada precedent lays out five elements for Section 122 of the Criminal Code, which relates to breach of trust. Conacher says four of those elements have already been admitted to. He says if Chief of Staff Katie Telford exerted political influence over the recommendation of WE Charity by bureaucrats, then the fifth element is fulfilled.

Conacher says the WE scandal is less widespread and systemic than AdScam, yet “is going to be very damaging because swing voters care about these issues and swing voters decide election results. And [Trudeau has] shown very clearly that he just reads the government ethics law as a suggestion, not a law, and he even ignores that suggestion.”

Daniel Bernier of Earnscliffe Strategy Group says Trudeau’s previous ethics violations in the SNC-Lavalin affair and the acceptance of a helicopter ride to the Aga Khan’s private island make the WE Charity scandal harder to shake.

“There’s a cumulative effect,” he says, adding that the scandal is “a gift that can continue to give” for the Opposition because it “will grow and it will continue. Of course, the government is playing its usual book all the way to ‘I’m sorry’ and the excuses and all that, but I think Canadians will be the ones to judge on that one.”

A commission led by Justice John Gomery found that of the $150 million handed out in the sponsorship scandal from 1996 to 2004, $2 million was awarded in contracts without proper bidding and in one instance $250,000 was added to a contract for no apparent reason. In addition, $1.5 million was given for work that was never done, of which $1.14 million was repaid.

WE Charity was awarded a sole-sourced contract worth as much as $43 million to administer a $921 million program. The contract was cancelled after it came to light that members of Trudeau’s family were paid hundreds of thousands of dollars to speak at WE Charity events.