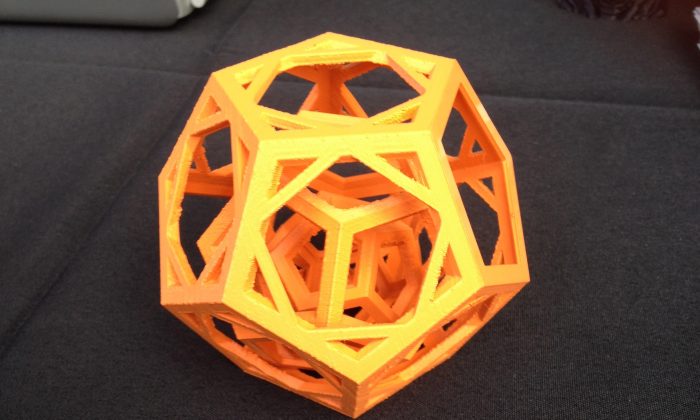 An example of advanced 3D printing at the Simplify3D booth at Maker Faire in Queens, N.Y., September 21. There are three dodecahedra (12-sided figures) nested together, all separate. (Ben Bendig/The Epoch Times)
Tech

One of the most obvious changes at Maker Faire, held at the New York Hall of Science in Queens, in the last few years is how far 3D printing has come along—once an interesting novelty, making relatively coarse objects, now 3D printers control resolutions in the order of microns, with some even working at the nanoscale.

Maker Faire features a wide range of exhibits, from lone inventors, engineers, and artists showing off their latest creations, to small businesses, to large corporations like Microsoft and Google. While robotics has long been a major part of the Faire, 3D printing now has its own section and a wide array of vendors.

Particularly striking (at least to me), was the many there who were offering to show people how to build their own printers—not just how to make their own 3D objects.

This brings it to a whole new level, where these devices can be made in one’s own home, and then produce countless varieties of objects that can also be made on one’s own. Times have changed, and it’s empowering the individual and small businesses.

There are companies, as well, that provide printing, and often these will be use sophisticated devices, such as those offered by Kraftwurx. The advantages to 3D printing over older manufacturing methods are many: they allow precise prototypes in a variety of sizes, they can use a wider variety of materials, they can be made quickly, and produced in nearly any location. Vendors at the Faire noted how more easily producing prototypes alone has started to make a difference in the business world.

As it becomes cheaper to do 3D printing, there will be other ways to save cost, mainly transportation—manufacturing overseas may no longer be worth it. While it may not work for huge operations, for smaller vendors it means that things can be produced at will, and thus to order, rather than guessing about how much inventory to keep.

At the Faire, one could also see banners about the “Hardware Revolution”—in recent years it has become cheaper to build electronics, and thus we see more hardware out there and available from individuals and startups. 3D printing is certainly part of this sea change, but may have more potential to disrupt traditional manufacturing.

There are also products like Arduino and Raspberry Pi that allow people to easily build hardware setups that can employ a variety of sensors to do all sorts of things. What was once the domain of those with a fair amount of electrical engineering knowledge is now far more accessible.