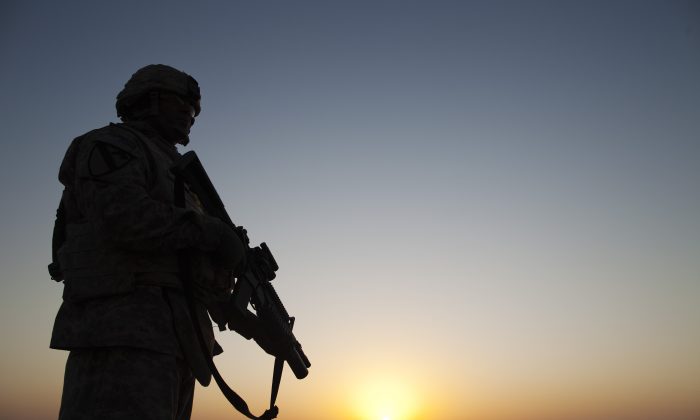 Specialist Dante Battle from the 3rd Brigade Combat Team, 1st Cavalry Division secures the perimeter outside of a Mine Resistant Ambush Protected (MRAP) vehicle on the way to cross the Kuwaiti border as part of the last U.S. military convoy to leave Iraq on Dec. 18, 2011, near Nasiriyah, Iraq. (Lucas Jackson/Getty Images)
Viewpoints

Make ‘Rules of Ranging’ Your Rules for Business: Part 8

This list of combat-proven knowledge isn’t just applicable to the battlefield. In Part 8 of this series, we’ll continue to explore how you can adapt these strategies in your professional daily life.

Rule 22: ‘When returning from a scout, use a different path as the enemy may have seen you leave and will wait for your return to attack when you’re tired.’

Or ‘Mission success doesn’t mean you can let your guard down.’

Any veteran of the United States’ most recent wars in Iraq and Afghanistan can tell you that the first 100 days of a combat deployment are the most dangerous. This is due to the convergence of new units who are the least familiar with the situation on the ground arriving into asymmetrical situations in which failure has dire consequences.

The enemy knows this and uses their institutional knowledge and familiarity of the terrain to their advantage, often with fatal returns for the opponents they view as foreign invaders attempting to destroy their way of life.

However, it’s also been my experience that the end of a mission—whether it be an entire deployment or a single operation—the last stretch before the finish line, is also extremely dangerous. When the stakes are high and yet you have still somehow been experiencing success and defying the odds, it’s all too easy to begin to allow complacency to creep in.

When you have a full belly and it’s getting late, it’s easy to fall asleep. This also applies to a feeling of satisfaction after an extended period of peak performance: It’s easy to give in to comfort and gradually lower your focus on maintaining situational awareness. When this happens, it’s only a matter of time before disaster strikes.

Rule 23: ‘When following an enemy force, try not to use their path, but rather plan to cut them off and ambush them at a narrow place or when they least expect it.’

Or ‘If you’re happy following in the steps of your competition, you’ll always be behind.’

When in pursuit of a highly desired target, it’s easy to get tunnel vision or end up with an unhealthy target fixation. It’s even easier to treat your competition as a pace man; when they speed up, you speed up, and when they slow down, you start coasting.

One of the best pieces of advice I’ve ever received for running in races is when you’re training, always sprint all-out for the last 100 meters. This simple exertion trains your body, mind, and spirit to push yourself to the very end. Cultivating an explosive mindset that can be incarnated in your flesh is how you learn and evolve to push past the competition and overcome the obstacles in your path.

When race car drivers are drafting cars in front of them, they don’t settle into a mindset of comfort. They’re actively looking for the right time to explode into the lead. Growth isn’t a comfortable process in any organization or organism. The temptation to settle into comfort and ease should be a signal you’re ready for retirement. If you’re not, you need to snap out of it and get to work.

There’s a reason trailblazers get to see new worlds first and fourth place medals don’t get handed out. If you’re fine with accepting a participation ribbon, at least be honest with yourself and your peers about it.

Rule 24: ‘When traveling by water, leave at night to avoid detection.’

Or ‘Know your vulnerabilities and avoid exposing them.’

Here’s the brutal truth: You have vulnerabilities and so does your organization. You can try to harden up these soft spots, but you would be foolish to pretend you can eliminate all weaknesses, or that you don’t have any to begin with.

If you’re not honest with both the extent of your vulnerabilities and the limits of how much you can mitigate them, know that while you’re sleeping soundly, your opposition is going to find a way to exploit them in devastating and surprising ways.

If your team’s mantra is “We do it this way, because we’ve always done it this way,” you might as well have one of your interns draft up an obituary for your organization and have it ready for release as a press release. Repetition gives your competitors a schedule by which they can more accurately attack you; “staying the course” is a fast path to destruction.

If you’re not surrendering, don’t expose your soft belly. Be aware of the gaps in your armor and act as if your opposition knows where they are as well. Being vulnerable is inevitable, but you shouldn’t encourage an operational posture that allows outside forces to target it at their convenience.