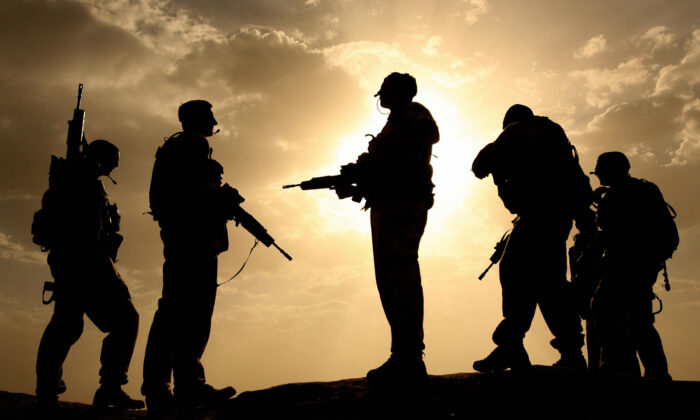 British soldiers from 21 Air Assault Battery Royal Artillery are silhouetted against the sky as they provide security for a meeting with the Afghan National Police at the fortress Qala-e-Bost in Lashkar Gah, Helmand Province, on May 17, 2006. (John D. McHugh/AFP via Getty Images)
Viewpoints

Make ‘Rules of Ranging’ Your Rules for Business: Part 10

This list of combat-proven knowledge isn’t just applicable to the battlefield. In the final part of this 10 part series, we’ll conclude discussing how you can adapt these strategies in your professional daily life.

Rule 28: ‘When locating an enemy party of undetermined strength, send out a small scouting party to watch them. It may take all day to decide on your attack or withdrawal, so signs and countersigns should be established to determine your friends in the dark.’

Or ‘Have a plan in place to address initial planning taking longer than forecasted.’

To paraphrase Robert Burns, “The best-laid plans of mice and men go oft awry.” Or, as we so often heard in the military, “No plan of operations extends with any certainty beyond the first contact with the main hostile force.”

In other words, do the best you can in your planning phase but be prepared for variations. This is especially relevant in the earliest of phases; there’s no value in rushing initial planning. Rather, be prepared that it may take time to get it right the first time and have plans to flex timing down the line.

Having signs and countersigns in place to “determine your friends in the dark” can also be taken as advice to not shoot the messenger who’s telling you more time is needed to determine the best course of action.

During every single training evolution, a Special Forces soldier hears, “Slow is smooth and smooth is fast,” at least a half dozen times. A well-thought-out plan takes time, so you need to slow things down so your team can have the time to develop a well-thought-out plan. It sounds redundant, but it’s easy to lose sight of this when you let a sense of urgency override the functions of your frontal cortex. That’s why rules like Rule 28 are written down, so their truths aren’t lost when the pressure is on.

Rule 29: ‘If you are attacked in rough or flat ground, it is best to scatter as if in rout. At a pre-picked place you can turn, allowing the enemy to close. Fire closely, then counterattack with hatchets. Flankers could then attack the enemy and rout him in return.’

Or ‘Tactical withdrawal is always preferable to a retreat.’

Business can be an extremely competitive and brutal thing, in which little to no mercy is given to the competition. While I think there’s a fantastic opportunity to have a Thomistic discussion about the morality of this, the ground truth is still the same at this time: Whether or not you would offer mercy, your competition will likely offer no quarter for your surrender.

When it comes to planning and strategy development, it’s foolish to not consider the most dangerous courses of action that any opposition could take. In the military, there’s a reason that the PACE model was used when planning for every operation: While originally referrring to the communications plan, the concept of having a Primary, Alternate, Contingency, and Emergency plan is valuable in a wide variety of circumstances.

When things are in motion, it’s wise to have a “rally point” that’s a pre-planned position that everyone knows to move toward in the event of the worst-case scenario becoming a reality. Here, leaders can take up a position that will allow them to make decisions that can stop the competition’s momentum and reverse the tide.

When it comes to competition, the only reason to take defensive action is to allow oneself to safely maneuver into a position to go back on the offensive. The difference between retreat and tactical withdrawal is the difference between panicking and deliberate action; while a tactical withdrawal is not the ideal course of action, it still allows you to remain in control of your team. With a plan in place, it presents the opportunity to counterattack and regain your forward momentum. This still counts as a victory.

In the 10 installments of this series on Rogers Rules of Ranging, we’ve discussed everything from how we as leaders must never compromise our integrity, to how silos make organizations weak and complacency kills.

I hope it’s been informative and helped you to rethink how you lead, manage, and inspire, as well as helping your organization become more efficient and agile. I also hope that it’s demonstrated the value of what Special Operations veterans can bring to the civilian sector. If you want to take your organization to the next level, introducing a Green Beret into the mix is sure to revolutionize the way in which you experience mission success.